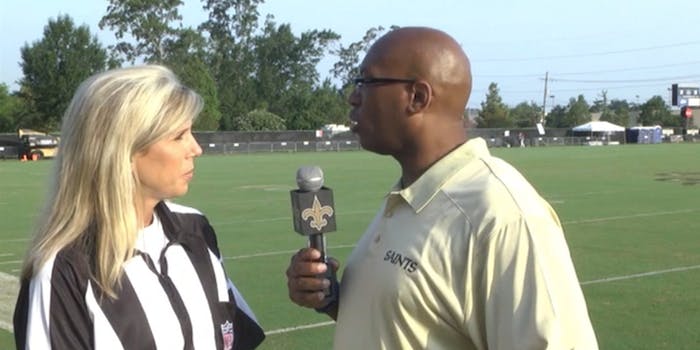 Sarah Thomas might become the first full-time female ref in the league. She's not a "pioneer." She just loves the game and knows it well.

Earlier today, the NFL’s official Facebook page posted an article announcing that Sarah Thomas might become the first full-time female ref in the league. In a video interview from the New Orleans Saints training camp, she’s asked if she “feels like a pioneer.” Thomas said no, adding that she didn’t realize there weren’t any female refs in the NFL.

Thomas, who is also a mother of three, has officiated College Bowl games and high school games in her native Mississippi, and she’s participating in the NFL’s officiating development program in New Orleans.

The Facebook post now has more than 2,000 comments. Some of them are complementary and applaud the NFL for introducing a female ref. And some fans reacted to this Earth-shattering news like you might expect:

Female refs? Women reporters in the locker room in 2013? What will happen to the fine game of football? And men’s domains?

This reactionary mentality is even embraced by a few women in the comments, who believe football should still be “man’s” sport. When asked by ESPN what the hardest part of her training has been so far, she said getting into shape after having a baby less than a year ago. Look closely, and there are a few parallels in the job of motherhood and referee. Perhaps this is a positive for the league.

Thomas’ response when asked if she thinks she’s a pioneer is telling: She is approaching this potential job from the same place as men; she loves the game and knows it inside and out. In an interview with ABC News, Thomas reiterated that people might need to just get over the gender divide:

“I think that we are just out here working as officials. … I think just on our credentials, just as officials, I think that’s what moves us along, not because of our gender or our race.”