It’s a little-known fact that defining people solely by their race, ethnicity or sexual orientation is hilarious and not at all offensive to anyone. WLOX Biloxi, Mississippi news anchor Dave Elliott knows this rule. That’s why he couldn’t understand why everyone freaked out when he posted the following comment on his Facebook page, referring to LGBTQI activists taking a “break” from their fight for equality as a “gaycation”: 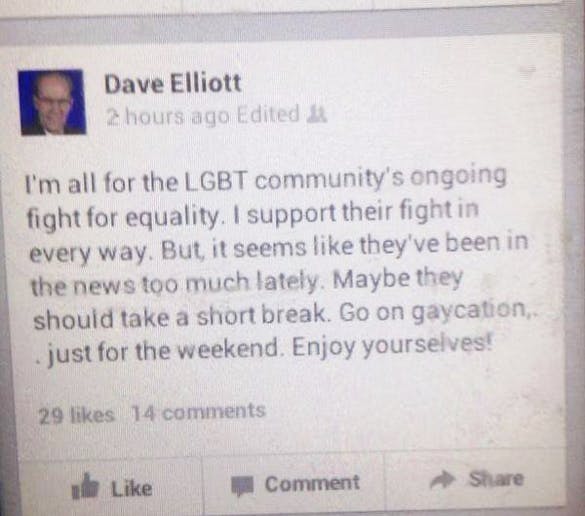 From the look of the “friends” icon at the top of the status, Elliott, who has worked at WLOX since 1985, did not intend for his post to be visible to the public. Nonetheless, the post was picked up by local news blogs and media blogger Jim Romenesko. WLOX viewers flooded the station’s Facebook page with demands for an apology.

“We are not happy at all with the post or any imagined ‘free publicity,’” the station wrote in response to an angry comment. “Dave made this post initially on his personal Facebook page, and you should look for him to address it on that same page.

It added: “Our station is committed to covering news that happens in our community, and issues important to our viewers – that includes the LGBT community.”

So that’s that, I suppose. Lesson learned: if you’re a public figure in the media, probably best not to make stupid jokes at the expense of a marginalized people on your Facebook page.