The subject matter was "too sensitive."

Illustrators Michael Kupperman and David Rees were hired last year to do a comic strip for the New York Times’s Week in Review section. It’s called See Something, Say Something, and it runs every other Sunday. This past Sunday, it was absent from the section.

Kupperman addressed this situation on his blog, and explained that the Times decided not to publish the strip, which was titled Testosterone Entitlement Theatre Presents the Man-Babies in “Hashtag Harassment!” Kupperman said they informed him and Rees that the subject matter of their strip, which attempted to satirize the male Internet response to #YesAllWomen, was “too sensitive.”

“The Times just said that the subject matter was too sensitive to be prodded at humorously,” Kupperman told the Daily Dot. “After thinking about it, I believe they might not have fully understood it and that made them nervous.

“Obviously the piece is more about male bullying than specifically about the recent shooting that inspired the hashtag. I don’t know if they saw that clearly.” 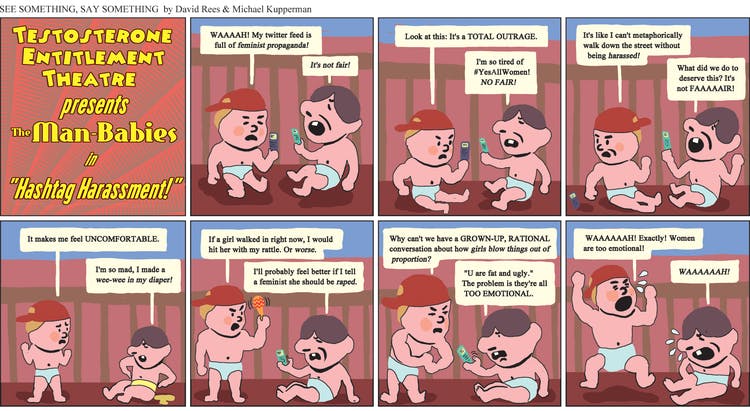 Rees is perhaps most well-known for his Get Your War On comic strip, which satirized cubicle life in the early Aughts. Kupperman’s work borders on the surreal, and is filled with colorful characters, like an animated snake and a strip of  bacon, the two characters from his Snake ‘n’ Bacon comic book series. That these two artists are working together, especially in the New York Times, is exciting.

The duo’s edge is evidenced by the fact that their most recent comic was rejected when it was just in the script stage, and Kupperman adds that this is not the first time the paper’s rejected one:

“David wrote a few weeks ago for Easter, with the basic message that Jesus loved the poor. That was considered too strong too. I think they’re scared of upsetting the white, upper-middle-class people that are their core audience. They’re not interested in actual satire.”

The Times did run a great op-ed from Charles M. Blow on the #YesAllWomen hashtag in Sunday’s paper, but Kupperman thinks the comic has an important message as well. Some commenters remarked that the strip was too heavy-handed, or made light of online harassment. Kupperman doesn’t see it that way.

“I think this strip made a point that needs making, that these men that wallow in their privilege and rage are infantile. I don’t see why it should have been rejected. … The whole experience with them has been kind of odd. They hired us last May, but held us from starting until January because the editor wanted a grand unveiling of the new section/new feature; we were supposed to alternate with Lisa Hanawalt in the slot, and it was going to be a big deal. By January, though, she was otherwise occupied, and so we were just dumped in a alternate week slot with the current cartoonist, no fanfare. Kind of a letdown.

“And I wonder, why did they hire us, when they’re so scared of controversy?”

The New York Times declined to comment on its decision. However, this is the strip they did run on June 1.