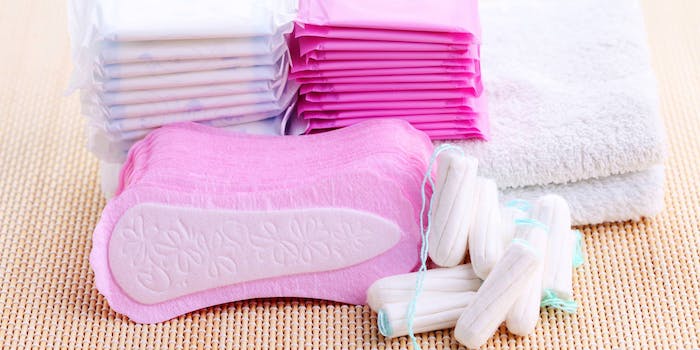 'Lifting it will spare all women the extra monthly burden of paying taxes on products that are already unaffordable to many.'

Menstruators, rejoice! At least, if you live in New York, because it just became the 11th state to repeal the tax on menstrual products. Which means Gov. Andrew Cuomo just tweeted a photo of tampons.

In a statement about signing the bill, Cuomo said, “This is a regressive tax on essential products that women have had to pay for far too long and lifting it is a matter of social and economic justice.”

Assembly member Linda B. Rosenthal, who introduced the bill to New York State Legislature, said, “Women statewide will no longer be burdened by a lingering tax that was levied at a time when women were not part of government and the decision-making process. The tampon tax is regressive, and lifting it will spare all women the extra monthly burden of paying taxes on products that are already unaffordable to many.”

New York State’s tax code previously stated, “Feminine hygiene products are generally used to control a normal bodily function and to maintain personal cleanliness,” and thus were not exempt from sales tax. However, the FDA classifies tampons and other menstrual products as “medical devices.” The new bill amends the tax law to add “feminine hygiene products, including, but not limited to, sanitary napkins, tampons and panty liners” to the list of exempt products.

The “tampon tax” has become a cause célèbre for many people who menstruate, who see things like menstrual pads, tampons, and menstrual cups as public health necessities, not “luxury” items, and that taxing them amounts to an institutional bias against those with uteruses. Activists have launched petitions and campaigns arguing that the tax puts financial burden on the half of the population that menstruates.

However, some believe that the “tampon tax” crusade misses the point. Samantha Allen for the Daily Beast writes, “Although the case can certainly be made that feminine hygiene products should be exempt from sales tax, presenting the issue as an obvious and pressing instance of discrimination is a little misleading given the bizarre nuances of state tax codes.” She argues that other “necessary” but ungendered items like toilet paper, soap, and toothpaste are also taxed, and that this isn’t so much an issue of an oppressive patriarchy than a government that needs to better classify what items count as necessary for personal cleanliness.

Either way, the lifting of the “tampon tax” in New York is another step toward making these necessary devices available to all who need them, especially New York’s poor and homeless populations. Earlier this year, New York City Mayor Bill de Blasio signed legislation that makes free tampons and menstrual pads available in all public schools, homeless shelters, and jails.