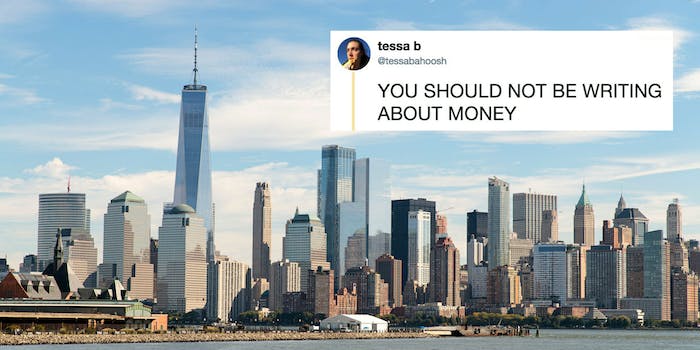 The “money diary” of a New York-based marketing intern is sending the internet into a tizzy over the assertion she gets by on $25 an hour.

The kicker? She doesn’t.

The article, published by Refinery29 as part of its “money diaries” series, details the marketing intern’s monthly earnings and expenses, all the while following the intern for a week. In the “diary,” the intern shares what she does throughout each of the seven days and tallies her purchases to show what she spends on things like food and drink and transportation.

The post gained traction after writer Tessa Bahoosh made the observation that “YOU,” the byline given to the unnamed diarist, “SHOULD NOT BE WRITING ABOUT MONEY.”

Bahoosh specifically pointed out the following points: that while the anonymous intern is only paid $25 an hour, she doesn’t have student loans and she doesn’t pay for health insurance, her phone bill, her $2,100 rent, nor her Netflix, Spotify, nor Amazon accounts (her parents foot those bills). And to supplement her lacking hourly pay (but minimal expenses), her parents give her $800 and her grandfather $300 each month.

Indeed, “You” might want to reconsider writing about how to make “$25 an hour” stretch, considering that she’s none too stretched herself.

Several other Twitter users slammed the piece following Bahoosh’s tweet, questioning if it was satire, or if someone was really this privileged to attempt to represent themselves as living in New York on $25 an hour.

is this not satire or

I was hoping this was satirical…

Hi. I would like to inquire about the Free rent, health care, phone/data, Netflix and $1100 plan?

How to live in NYC on $25/hr – Have someone subsidize your life style.

Some just couldn’t bring themselves to read the entire thing.

i stopped reading at my parents give me a $800/month allowance https://t.co/kSBT8Io8Kb

Others, too, could not understand how this article could be real.

Oh my fucking god, why is this real? https://t.co/O6K6ZfLbEI

And some bashed the entire “money diaries” series.

I love when money diaries are like, "I buy $400 worth of cold brew a month at the health food store. It's cheaper than Starbucks!!!!!!!!" Are there people who don't know you can purchase coffee beans and turn them…into coffee

Despite the barrage of anger this specific article garnered, however, supporters of the series, in its second year of publishing, argued that it helps women openly discuss financials and know what it’s like to live or vacation in different parts of the world on a salary they might expect to make in two years, or even on the salary they currently have.

A quick scroll of the series, too, shows that reader submissions are taken from more than just privileged young women, but women struggling to make ends meet and women living uncomfortably. And while this diarist’s generational wealth feels misleading in the context of living in one of the most expensive cities in the U.S., there are several other accounts of other diarists living in New York to read and learn from.

Elite Daily senior news editor Alexandra Svokos pointed out that not including stories of privilege in the series was a disservice to readers, and ignored that privilege like the diarist’s exists in the first place.

“It is an *ongoing* series, so this one entry is one of dozens, all of which represent different tax brackets, privileges, barriers, locales, industries, etc. To not have someone privileged talk about how they spend would be to ignore that privilege exists,” Svokos tweeted. “Complain about the $1100 allowance all you want, but that privilege exists is not Refinery’s fault—in fact, their work draws attention to the fact that privilege makes life extremely different for people for no apparent reason.”

Lindsey Stanberry, the director of Refinery29’s Work & Money section, went on BuzzFeed News’ morning show AM to DM, stating the staff was surprised by the attention. She said that diaries are published daily, and called the initial headline a “mistake on our part” for not including the diarists’ monthly allowance.

“It was a lot of men tweeted negative things about it, and it kind of felt like they hadn’t dug deeper in our catalogs,” Stanberry said of the criticism.

Correction: A previous version misidentified Alexandra Svokos’ position at Elite Daily. She is a senior news editor. We regret the error.