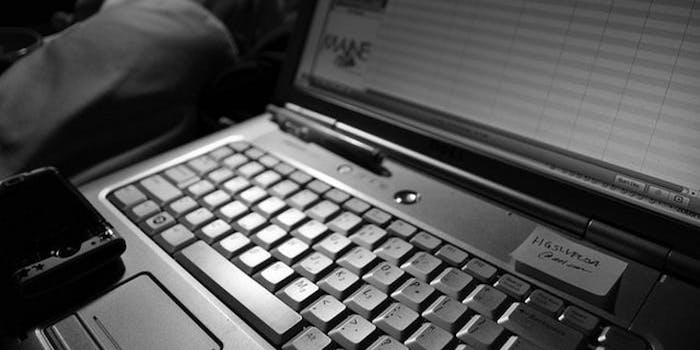 Rebecca Martinson, you’ve got a challenger.

Remember Rebecca Martinson, the University of Maryland sorority sister who sent a profanity-laced email to her fellow Delta Gamma sisters last April, then had her rant dramatically read by actor Michael Shannon? We should all be so lucky, but it looks like someone is trying to oust her from the annals of crazy sorority email history.

Today, Total Sorority Move posted an email from yet another sorority sister with a lot of opinions. The writer claims it was submitted by the source herself, and that they “do have the girl’s sorority, and school, but chose to leave it out.”

Why would they choose to leave that out, if the email was indeed submitted by the sorority sister herself? It certainly could be fake, or perhaps someone was trying really hard to leak it, or perhaps the submitter wanted to protect her school.

In the comments, the author of the TSM piece claims the email came from a school in the South. Another commenter guessed Texas State via the email’s references to “the square.” This was also published suspiciously close to the date Martinson’s email was leaked. Will this become a yearly event now?

Whereas Martinson’s rant was in response to her sisters’ “boring” behavior at social events, this one, allegedly titled “Real Senior Sendoff Letter,” is apparently from a sister who’s graduating, and attempting to extend some life lessons to her younger sisters.

Depending on how critically you read it, this is either some really awful, or really tongue-in-cheek life advice. It could read as a woman who’s completely denouncing a sexist sorority/fraternity system via some good old fashioned sarcasm, especially the bit about living life by a double standard. If this is a real sendoff that dryly skewers the physical, emotional, and sexual standards women in college are held to, then it needs to be worked into some new Anna Kendrick movie. Or maybe this is some sly promo for a new Anna Kendrick movie?

“My younger sloots of [sorority redacted],

It’s me, your favorite ghost senior of the sorority. Yeah, you little bitches probably don’t even know who I am because I’m the one who doesn’t show up to shit because its pointless and when I do, I sneak out like two hours in when important people aren’t looking. Learn from my way little ones, cheating the system is how you get through life. Now, even though the majority of you bitchez don’t know who I am, you really should have gotten to know me though, I would have made your year fucking awesome. Ask [name redacted] and [name redacted], they may have some choice words and stories to tell about me.

Alright, so me being a senior, not even knowing how the fuck I made it this far in life without killing myself because I am a dumb fuck, I was told by our officers who think they rule the fucking world to leave a senior will….so I’m going to be so blunt and truthful with you sloots you will learn everything you need to know about college right here in this letter…

Have sex with as many boys as you can. Well, not exactly, check out their penis first. Dick pics are God’s gift to women. Make sure you inspect the goods before you let it penetrate you vagina. Having sex is awesome. The best thing you can do for your sex life is to learn to love sucking dick. It is one of my favorite pastimes. I could suck dick for like 7 minutes, anything after that is too long. You should have definitely made your man bust his load all in your mouth in 7 minutes. If you can’t achieve that, sorry sweetheart but you have better chances at becoming a lesbo than getting dick.

If you are one of those “classy” ladies who don’t swallow. Go crawl into a hole with Ellen DeGeneres and learn to eat pussy, because that is what you are. Spitting is for quitters, you swallow that sweet ‘n’ salty mix like the real woman you are. Your man for the night will forever tell his bro’s about you dick sucking abilities. Oh, if you haven’t noticed by now, I love sucking dick. I crowned myself the dick sucking queen and no one is ever taking that title from me, so back the fuck off.

3. Blackout or Back the Fuck Out

If you are getting ready to hit the square or frats with your sisters you better have already been pounding some liquor by 7pm. No one ever enjoys a sober sally, she judges the fuck out of you and even though I judge everyone who is within 4 feet of me, no one can judge me. I live my life by a double standard (see number 4). It is a really great feeling to wake up hopefully in your bed, and look to your side with a confused look asking yourself “did I have sex with him?”. It has happened to me countless times, but luckily I always find my used condoms on the floor of my room so I sorta know when I have had sex. I bring home classy dudes. On several occasions, I have brought home someone from the bar and tried to introduce him to my roommates/friends and forgotten his name. Always have the upper hand, you don’t need to know his name to hop on his tic tac.

4. Live your life by a double standard

You are queen of the fucking world. You can do no wrong. You’re the only one who can fuck random’s every weekend and not be judged. You’re the shit and no one can tell you any different. You can yell at your slut roommate and tell her that her bedroom is a revolving door even though you hooked up with two different guys in two days, it could have been three but who is counting anymore? Excuses are your new best friend, not that fake fucking Yurman your sleazy ex got you because he was a two pump chump. You better start having excuses memorized like the 6-carat princess cut engagement ring your rich as fuck future boyfriend better get you in a few years you have memorized. I live my life by the absolute biggest double standard and it has gotten me so far, you young sloots better start doing the same. We need someone good to be the next A of [sorority redacted].

So, you fucking lucky little bitches have a few more years to run out mommys credit card, while crying to daddy that you have no money in your account so he slips you some cash for booze and weed. Spend that cash you don’t have on illegal drugs unless you’re one of the blessed who is already so fucked up you stumbled upon prescription drugs. If that’s the case, hit me up ;). Remember, wrap it before you tap it, no one wants the herps, and if you can, always be slightly drunk. Life will be so much better.”