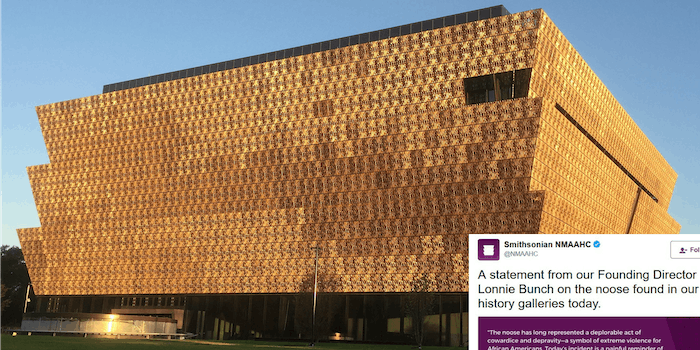 This is the second time in less than a week this has happened at a Smithsonian Institution.

A noose was discovered at the National Museum of African American History and Culture in Washington, D.C. on Wednesday, the second time in less than a week the symbol of race intimidation has been found in a Smithsonian Institution.

The noose was first found on the floor by a tourist inside the section of the museum called the Era of Segregation 1786-1968, BuzzFeed reported.

“It was rather a small rope thing and not something that would set off the magnetometers,” Smithsonian spokeswoman Linda St. Thomas told the website. “Park Police removed it and we reopened the gallery about an hour later.”

Last week, a noose in a tree—an obvious symbol of the historical lynching of black people that was commonplace in this country from the 1880s to the 1960s—was found outside the Hirshhorn Museum, a short walk across the National Mall from the African American history museum.

The noose found Wednesday, though, was even more concerning to Smithsonian officials.

“We do consider this one to be different,” St. Thomas said. “In this case, it’s clearly a message to the museum.”

The museum’s founding director, Lonnie Bunch, made the following statement:

A statement from our Founding Director Lonnie Bunch on the noose found in our history galleries today. pic.twitter.com/sFWVSaobhV

The U.S. Park Police is investigating both incidents.

“The Smithsonian family stands together in condemning this act of hatred and intolerance, especially repugnant in a museum that affirms and celebrates the American values of inclusion and diversity,” David Skorton, the secretary of the Smithsonian Institution, wrote in an email to the Smithsonian’s employees. “We will not be intimated. Cowardly acts like these will not, for one moment, prevent us from the vital work we do.”