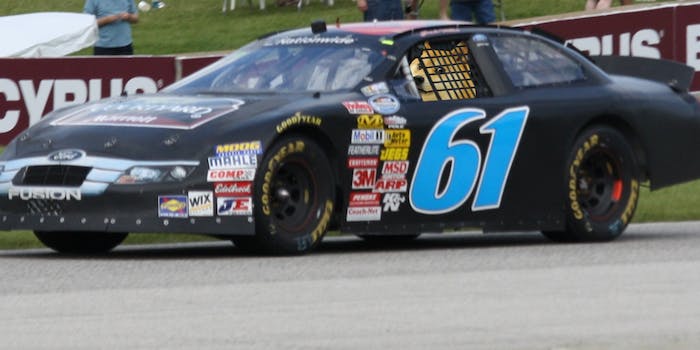 Earlier this year, NASCAR driver Josh Wise got the sponsorship of a lifetime. Always-enthusiastic proponents of Dogecoin—that dog-meme-themed cryptocurrency that’s often freely handed around the Internet as tips—decided to front the bill for the Aaron’s 499 race at Talladega Superspeedway, which starts Sunday at 1:00 EST on Fox.

That means a convergence of two very different subcultures. Millions of NASCAR fans are going to marvel at a Shiba Inu-themed car, and a number of curious dogecoiners are going to be tuning in to watch their first race. Wise talked with the Daily Dot before leaving for his preliminary qualifying race Saturday—about what to watch for Sunday, the difficulties of explaining Dogecoin to the public, and how awesome it is to have a car with “much draft” written in Comic Sans on the back of your racecar.

I see you on Reddit from time to time, and the dogecoiners on Reddit sure love to tip. How much Dogecoin do you have at this point?

There’s so many Dogecoin and meme folks who are gonna be tuning in Sunday who have no idea what to watch for in a NASCAR race. What should they expect?

It’s gonna be a perfect race for people to watch for the first time. It’ll start off with guys being kind of aggressive, trying to settle into their positions where they feel comfortable. The way this race unfolds is a little more simple than a typical race, because the draft is such an equalizer. Pretty much 90 percent of the cars are going to be in one big group on the track. You’re gonna be able to see almost everybody, what’s going on, and everybody’s gonna be using similar pit strategy. It’s not gonna be very confusing. I think that people can just put their feet up and enjoy the race.

Does that mean Talladega is different from other NASCAR tracks?

Basically, Daytona and Talladega are the biggest tracks we run, at 2.5 miles. We run restrictor plates on our cars, because if we didn’t have them, we’d probably go 230, 240 miles an hour. The cars would take off, literally, like rocket ships at that point, and crash. So they put restrictor plates on the car to slow them down, and that has a way of bunching the pack up. With the restrictor plates on, we never have to let off [the gas]. Everybody goes full throttle around the track.

What happens is stronger cars will be up in the front of the pack, but that kind of sets a big hole in the air. That’s the limiting factor, the resistance of the air on the car, so all the other cars can always catch up. No one can ever break away, break out, and pull ahead. So on the last lap, it’ll be like a congested interstate, where you have three lanes of ten cars. If one of those lanes just pulls a stronger run, you can be in 30th on that outside lane, and in one lap, if that lane gets a run and clears the other lanes, you can pass.

How do you strategize for that?

Something that’s interesting about this place is you can be OK running 28th place on the last of the lap, because of the lanes move, how the draft works. You’ll see really good guys like Jimmie Johnson, Tony Stewart, Kevin Harvick, they’ll drop back to the back and ride around in last place for the whole race, just so they don’t risk getting caught in a crash. And you’ll see them kind of time their pit stop strategy to propel them to the front. There’ll be a lot of different strategies as far as that goes. It’ll be an interesting race for sure.

What should we expect to see from you?

It’s gonna be a little from the hip. If we qualify better and we start towards the front, we’ll probably stay towards the front. If we qualify a little worse and start towards the back, we probably won’t be too aggressive in trying to race to the front, because a lot of times there’s not a whole lot to accomplish there. [Note: Wise went on to qualify 36th out of 43 a few hours after this interview.] We could be running fifth one lap and the next be running 25th, and there’s a lot of risk involved in migrating from those positions. Sometimes you’re better off just hanging out, chilling out, and letting things unfold till the end of the race, and then going for it.

What’s it like explaining Dogecoin on the NASCAR circuit?

I probably literally explained it 100 times already this weekend, because people are really curious. It’s hard, especially in interviews, to really explain it properly, because it’s really so beyond what people are dealing with right now. It’s been a challenge. I try to relate it to electronic cash, but then people still don’t grasp it. They’re like ‘well how is it cash?’ but they have all kinds of followup questions. Which is great; that’s what we’re here for.

How pleased were you with your shibe-themed car design, especially the back?

I think it’s so awesome. I was sitting with my crew yesterday and someone sent me a picture of the back of our car, and it’s just that Shiba Inu. I was like, that’s the most awesome rear end of a car I’ve ever seen. It’ll be good to talk to some of the [other drivers] after the race, see what they thought about the Shibe.