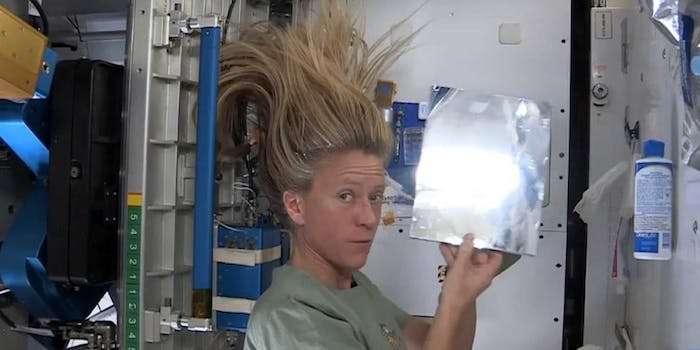 NASA astronaut shows you how to wash your hair in space

NASA's Karen Nyberg continues her series of videos from the International Space Station.

NASA astronaut Karen Nyberg is basically vlogging aboard the International Space Station. This week, she posted an out-of-this-world beauty tutorial where she showed viewers how to wash long hair in zerogravity.

In the video, Expedition 36 crew member Nyberg’s locks flow freely straight above her head like Marge Simpson or a troll doll. She then squirts warm water from a silver pouch onto her scalp and hairline, droplets flying out into space. She then uses no-rinse shampoo, a towel, and a comb to finish the job.

All her tools must be secured to the wall in front of her with Velcro lest they fly away. She also must reuse her towel as often as possible because of limited supplies. (Insert a Hitchhiker’s Guide to the Galaxy joke here.) Once the water in her hair evaporates it’ll go through the space station’s purification system and be reused as drinking water.

The video is one of a bunch on a YouTube channel called “Inside ISS.” It seems like each of the astronauts are starting to have their own shows on the fairly new channel, including “Don and Mike’s International Space Station Sciene Garage,” a Bill-Nye-esque educational show about human life in space.

It’s all very interesting. Even the most mundane tasks are intricate balancing acts in space.