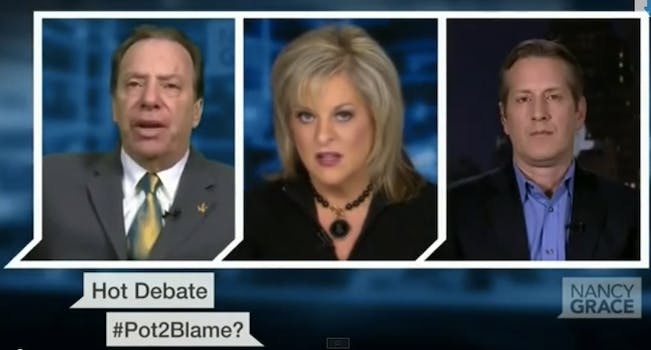 The TV host is arguing the merits of marijuana once again.

What do 2 Chainz, Dr. Drew, and me have in common? We all think Nancy Grace is insane.

It’s been two weeks since Nancy Grace/2 Chainz-gate broke the Internet, and we still don’t have an answer to the ever looming question, “Is #Pot2Blame?”

Grace continues to bring guests on her show to debate the topic by prompting them with specific instances where, based on the facts of the case, pot was apparently #2blame. She revived the debate on Tuesday, and dragged Dr. Drew Pinsky of HLN’s Dr. Drew On Call, and Dr. Michael Arnell, a forensic pathologist, down the rabbit hole.

Viewers were also reunited with Norm Kent, an attorney in support of legalization and everyone’s favorite Floridian liberal uncle, after Grace regaled the panelists with the story of a man who is accused of killing his wife after eating a marijuana cookie. This is, as is Grace’s trademark, an awful, tragic story. But Grace used it as fuel for her pot-hate fire, one which she loves to keep rekindling. Enter, Kent:

“Have you no conscience? When will this stop? When will you own up to the fact that millions and millions of Americans can light up a joint, and have been since the age of Woodstock, without impairing families, driving recklessly, or endangering people.”

Grace replied with one of her patented quips. And this one was topical! “Obviously, you’re STONED.”

Drew became the 2 Chainz, so to speak; the sensible, level-headed middle man, with whom viewers will likely agree. He presents the opinion that the man accused of killing his wife after consuming a marijuana cookie might have been smoking to deal with prescription drug withdrawal. The police report did indicate that empty pill bottles were found in the man’s home.

“In this case, there’s nothing to suggest that the pill bottles had anything to do with this,” Nancy Grace shot back. Dr. Arnell joined the fray via phone, to kind of side with Grace, but also not!

Arnell said that while he didn’t agree with Dr. Drew’s withdrawal assessment, he wouldn’t use the case to prove the point that all pot is bad. He did, however, add: “There are a subset of individuals who exercise extraordinarily bad judgement on THC alone.”

So, is #Pot2Blame? For a few incidents, sure. But so is laundry detergent. As are banana peels, as any fan of Mario Kart can attest.