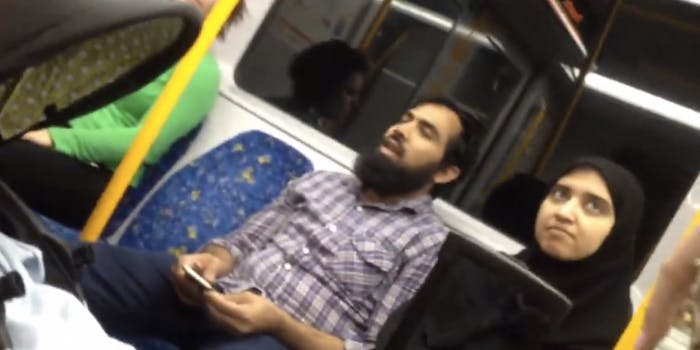 Is it OK to speak out against anti-Muslim harassment if you’re white?

A viral video shows a white woman speaking out against the harassment of a Muslim couple. Some think the clip is exemplary of a 'white savior complex.'

In a video shot on April 14 that has since gone viral, a young Pakistani couple sits with their baby on an Australian train while being verbally harassed by an unknown older woman.  The video is mostly footage of the ensuing argument between the harasser and a female bystander who steps in to defend the couple and tell the harasser off.

The video shows the couple, Hafeez Ahmed Bhatti, 33, and Khalida Hafeez, 26, patiently enduring the uncomfortable comments. Amid remarks about Syria and ISIS, the woman nonsensically asks Khalida Hafeez why she wears a headscarf “for a man that married a six-year-old girl.”

That’s when the bystander, a 23-year-old white woman named Stacey Eden, steps in. “She wears it for herself, OK?” Eden says in the video. “She wears it because she wants to be modest with her body, not because of people like you who are going to sit there and disrespect her.”

Eden has said that the couple remained silent while the offender touched the woman’s headscarf and ranted anti-Muslim statements. According to Eden’s Facebook post, she “sat there for a good ten minutes before I started recording this, while I listened to this woman bad mouth Muslims and call the lady sitting opposite me an ISIS supporter because she wore a scarf.”

The couple appears to remain stoic in the video, mostly not responding to the woman’s rants. In a Facebook post, Bhatti, a Pakistani native living in Brisbane, explained why he chose not to engage with the offender on the train.

“My silence was the representation of Islamic teachings which want its followers to have patience, tolerance, respect and love for everyone, even for those who hate you,” Bhatti wrote. “I tried to show the world though my action of silence that Islam is peace loving religion and it has nothing to do with aggressive and extremist behaviour.”

But early on in the short video, Bhatti does open his mouth to respond to the harasser. His response is cut short when Eden begins to scold the older woman.

Eden’s response has received praise from many Arab and Muslim people online. But some critics have suggested that her actions steamrolled the couple’s own ability to defend themselves and smacked of white savior complex.

Ashitha Nagesh of the Independent wrote, “If I’m being racially abused I don’t need a white stranger with a savior complex to rescue me.” She also said that by stepping in on the couple’s behalf, all Eden did was deny them a voice. 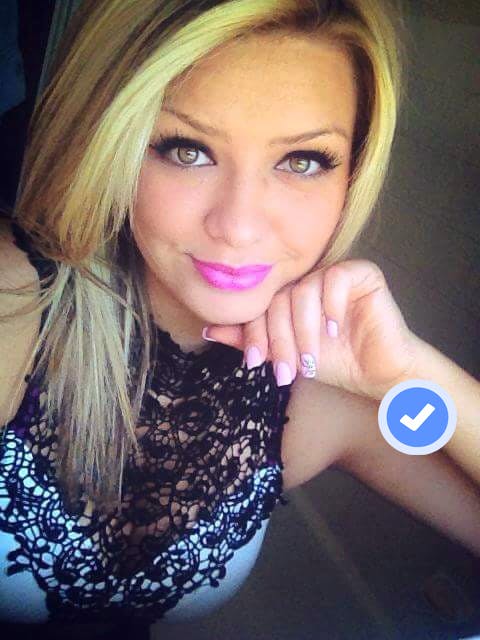 Indeed, some of the media coverage of the event has lauded Eden for “saving” the couple. Few reports have focused on how the event reflects the frequent, ongoing harassment of Muslims all over the world.

But Bhatti himself doesn’t see Eden’s actions as inappropriate. He told the Daily Mail that when the incident started, he didn’t quite know what to make of it.

“She asked my wife why she was wearing a scarf when it was hot outside— when my wife answered her I thought the woman was asking to be friendly,” Bhatti said. “Then she started saying Muslims like us are trying to conquer Australia and behead everyone here. We were absolutely shocked.”

Bhatti was grateful to Eden for stepping in, writing on his Facebook page, “God bless Stacey Eden who support us.” The couple’s Brisbane mosque subsequently offered Eden, a Sydney resident, an all-expense paid trip to visit the city and the mosque.

Qasim Rashid, in an essay published today on The Good Men Project, wrote that he was “comforted” by the video showing Eden defending the couple. Rashid wrote about watching his wife get berated for wearing a hijab at the DMV, and being forced to endure the humiliation and discomfort of having his infant son’s diaper checked for explosives at the airport.

“What I don’t remember is getting angry that a white person, or any person for that matter, swooped in to save the day. Because that never happened. No one swooped in. No one stepped in. No one even stopped,” wrote Rashid. “While the moral support would have been welcomed, the world simply continued on without missing a beat. Meanwhile, my wife, children, and I were singled out time and time again because of our faith and skin color.”

Clearly the intervention was welcome during the Australian incident. But are there times when a white person stepping forward to speak out against the harassment of Arab or Muslim people is not appropriate?

Are there times when a white person stepping forward to speak out against the harassment of Arab or Muslim people is not appropriate?

The Daily Dot asked Zeinab Khalil, lead organizer and advocacy trainer at Arab American Association of New York, for her thoughts on the subject. Khalil said that hate crimes against Muslims and Arabs have gone up five times since 9/11, and harassment is rampant.

“At times it’s dangerous for an Arab person to be visible for their own safety, and in those times it’s important for a white ally to step up,” Khalil said. “We need white allies to do their part, but [we] also need them to be listening and asking ‘How can we support you and where can we step in if it’s difficult for you to do so?’”

Khalil recalled her own experience of being physically assaulted in an anti-Muslim attack. “When I tried to defend myself, it got worse. And nobody stopped to help,” she said.

While Eden’s defense of the couple on the Sydney train was undoubtably welcome assistance, it’s interesting how much of the media coverage focuses on Eden herself. One headline from Australia’s 9News reads “I just had enough: passenger who stood up for Muslim couple abused on Sydney train speaks out.”

Another story on a New Zealand news site is headlined “’Legend’ Stacey Eden defends Muslim couple being abused on train.” And the BBC News stated, “Australians rally behind woman who defended Muslim couple.”

Khalil said it was important to recognize that there are frequent attacks against Muslim and Arab people. Many of those don’t make the headlines, while an attractive young blonde woman who briefly spoke out against racism does.

“It’s interesting what stories get visibility, what attracts media attention in general,” said Khalil. “There are countless stories of Muslim people who are being harassed and defend themselves, and they are usually criminalized.”

In a best case scenario, the attention paid to Stacey Eden’s public defense of Hafeez Ahmed Bhatti and Khalida Hafeez will result in more awareness of the everyday racism endured by many Muslim and Arab people all over the world. But the focus shouldn’t just be on the white allies who occasionally step in.

“We need to be more critical about what’s gaining our attention,” Khalil said. “Violent targeting of Muslims happens every day. Why don’t we value the ones who stand up for themselves?”