The terrorist attacks in Paris on Friday that killed 129 people and injured hundreds more have been attributed to the Islamic State in Iraq and Syria (ISIS). But in the aftermath, many ordinary Muslims are suffering from religious and cultural stigmatization, as evidenced by one man’s exchange on the hookup app Grindr.

Anthony Magallanez is a Grindr user in Phoenix, Arizona. He was recently messaging with a fellow user who took issue with Magallanez’s use of Lebanese song lyrics written in Arabic on his profile. The other user confronted him with a barrage of Islamophobic slurs. 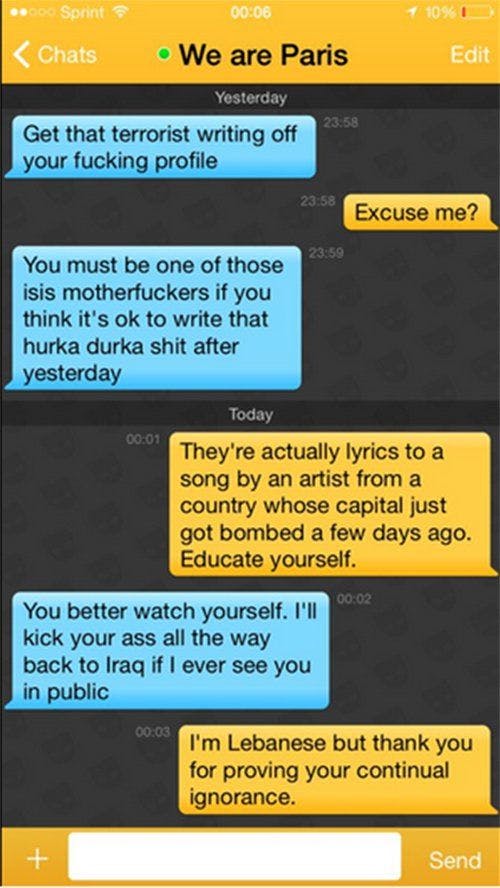 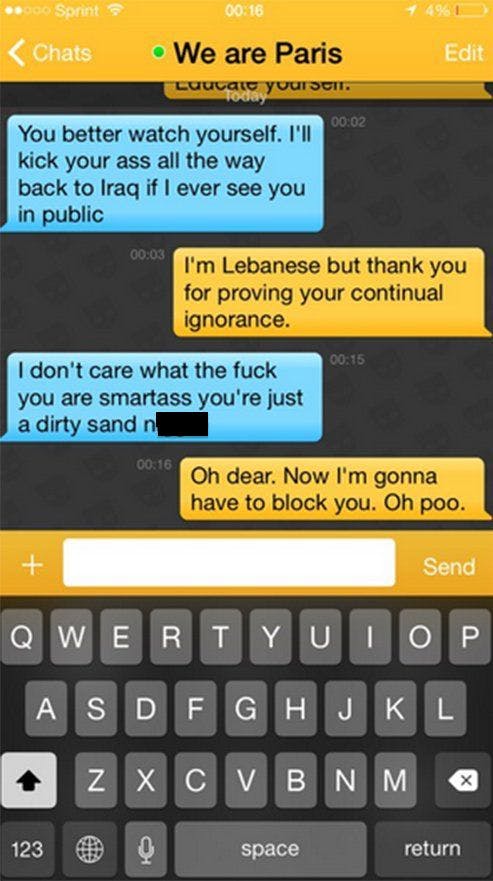 “At first I thought it as a joke, but one in bad taste, so I asked for clarification and it became clear to me that he only wanted to be hateful, so that’s when I stopped taking him seriously,” Magallanez told Gay Star News.

“At the same time,” he added, “I tried to be light-hearted with him and show that, ‘Yeah, I’m Muslim, but am I the one being aggressive here?'”

He admitted that he’s fearful for “Muslims in Europe as well as those here in the United States and most of all those in the Middle East, who are the most direct and immediate victims of groups like Da’esh [ISIS] and al-Qa’eda.”

But these groups are not the only ones trying to hurt Muslims. In the days since the Paris attacks, there have been many instances of Islamophobia. A British salon owner found herself in hot water after she wrote on Facebook that she’d refuse customers based on their faith. “Blinks of Bicester are no longer taking bookings from anyone from the Islamic faith whether you are U.K. granted with passport or not,” read one post. “I hope your families get blown up by ISIS,” read another.

Here in the U.S., more than half of the nation’s governors have publicly declared that they will not permit Syrian refugees driven from their homes by ISIS to resettle in their states.

Update 1:43pm CT, Nov. 18: Magallanez replied to the Daily Dot’s request for comment. When asked if he’d ever received similar messages, he replied, “Of course. Grindr is rather infamously known for being full of casual racists and encountering racism, especially Islamophobia (and misogyny), is nothing new to me. I don’t feel the issues of racism and misogyny in the gay community are talked about enough because they’re often chalked up to preference or ‘just how it is,’ but it’s too important to ignore.”

But Magallanez continued that he won’t let this recent unfortunate incident discourage him from using the app, and intends on keeping the song lyrics intact: “I will not be removing the text from my profile for the sake of bigots. They don’t deserve to get that out of me.”