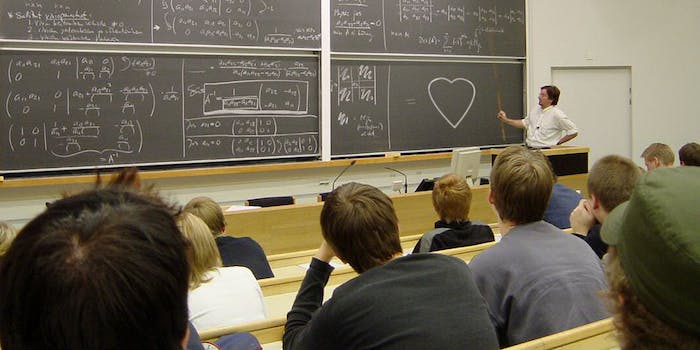 How pick-up artists learn to love

What happens when a pick-up artist settles into something long-term? There's a forum for that.

Pick-up artists have a tight-knit online presence. They trade tips, “lay reports,” and highly philosophical dissections of “game,” “negging,” and “routines.” Message boards like MPUAForum.com provide a water cooler for dudes to mill about when discussing which part of their seduction skill set needs work.

To a layperson, the PUAs’ traditional endgame appears to be a one-night stand, and not necessarily the kind where you learn the woman’s name. Ads on MPUAForum offer methods for those who want to “BANG 6 GIRLS A WEEK.” These guys are about quantity, with quality something of an afterthought.

So what happens when a pick-up artist settles into something long-term? As it turns out, there is an entire support topic for that: “Relationships” is the header, with the clarification “Discuss girlfriends and maintaining a happy, healthy relationship.” 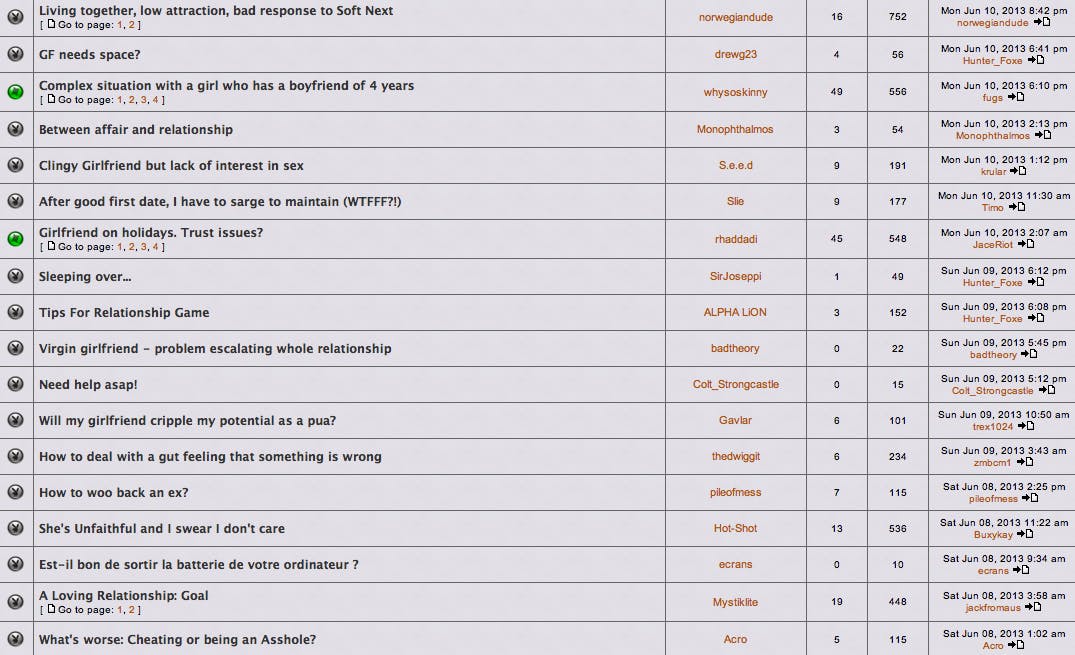 The individual threads provide fascinating glimpses into the transition from ladies’ man to aspiring significant other. “Beginning of relationships – don’t know what to do” is a typical title. User arnyy here writes:

After learning and reading all information that I have found in this and others forums, my seduction skills are pretty good now. I was changing girls every weekend, but now I want to stop – I found a girl that I would like to have for a long time.

Sounds like someone’s growing up, kind of. He goes on to describe his potential girlfriend and receives surprisingly sound advice in reply: holding onto a partner is “a totally different game” and requires a deep understanding of oneself.

Elsewhere, men commiserate about “the six month curse,” a rut that relationships will either fizzle in or overcome. This is an area the PUAs, unsurprisingly, have a lot of trouble with. 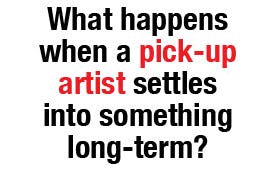 “Do you do your best to make some things special ? like candles etc. or do you just focus on being ‘the leader’ ? or: how to occasionally do really nice stuff and still lead ?” asks one befuddled boyfriend. A friend has similar issues: “yeah really sucks, I was also wondering, do you freeze her out to a certain level or do you rather do the opposite and seek rapprochement in this situation ?”

Candles and freeze-outs are hardly the worst of it. Scroll down and you’ll find out, in posts of densely acronymic PUA-speak, how to maintain multiple girlfriends without any of them finding out (at least for a while) and what to say to your better half when she asks you what you did that day. It appears you should be “Demonstrating your Higher Value” in the latter case, or DHV.

Social ineptitude of this order—really, you can’t just say what you did that day?—is, to many outside the community, the hallmark of the pick-up artist. They’ve so overdeveloped certain sexual/business instincts that romantic friendship and simple decency are practically taboo.

Still, there’s an earnestness here. The PUAs may never talk about “love,” per se, but that they ever begin to care deeply about a former conquest shows they are not a lost cause.

Ultimately, they may even find that meaningful human bonds aren’t forged with just a few simple tricks.