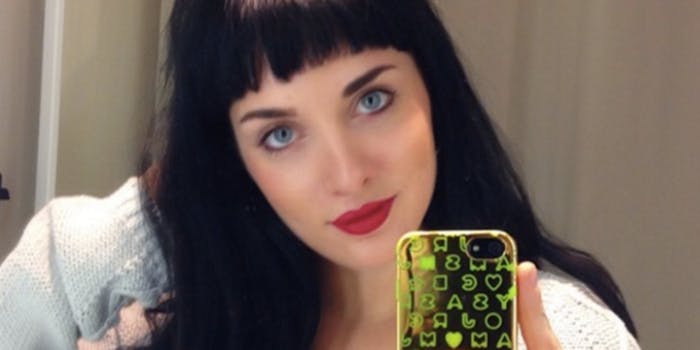 ‘Not everyone sucks’: A Q&A with Lauren Urasek, the most popular woman on OkCupid

But she has gotten a lot of obnoxious messages.

When Lauren Urasek learned she was the most popular heterosexual woman on OkCupid back in 2014, she received an average of 35 messages a day. Sure, a lot of those messages were garbage—but plenty of others weren’t. The 25-year-old makeup artist must be doing something right.

Urasek isn’t sure what made her profile appealing to so many men. In the introduction to her new book, Popular: The Ups and Downs of Online Dating From the Most Popular Girl in New York City, published in October, she offers a few guesses as to the contributing factors:

It could be the tattoos, blue eyes, and correct spelling on my profile, or the fact that I don’t write generic things like “I’m living my life to the fullest and I love long walks on the beach!’’ It could be that looking for a man isn’t the most important thing going on in my life. (I think it’s a problem when it is.) I’m confident and secure in who I am without having a partner. I have a strong opinion and know what I want. Maybe dudes like that? Or maybe they just have a fantasy of fucking a girl with tons of tattoos?”

Most of us aren’t getting 35 messages day—or even a month—to our online dating profiles. (And if you want to read Urasek’s most creepy, awkward, and harassing messages, she has a blog called They Really Said This full of ’em.) So, what can the most popular woman on OkCupid teach us about snapping the perfect profile photo or gathering the courage to ask someone out in person? Recently, the Daily Dot spoke with Urasek about all of that and more.

How long have you been using online dating sites?

I probably started three years ago. I met my last boyfriend six months into that first year. We dated for only six or seven months, and then I’ve pretty much been single for the last two years. But it’s off and on. You get frustrated and deactivate everything. And there have been times when I’ve really, heavily checked it every day. But now it’s like an every few weeks thing.

You found out about being the most popular woman on OkCupid because New York magazine contacted you for their article on the most desirable singles in New York City, right?

OkCupid contacted me, saying “New York magazine wants to write this article about daters in New York.” So I was like, “Yeah, sure, whatever.” And I wound up showing up at the restaurant where I’m meeting the journalist, and he was just, like, “So you’re the most messaged girl on OkCupid.” I didn’t know about it until the interview. Obviously, it’s flattering and surprising. I just thought a lot of girls received that many messages.

Let’s talk strategy: What makes you most likely to respond to a guy from an online dating site?

As long as you’re not writing a really horrible message, it’s really about your pictures and your profile, whatever you say. If I’m attracted to you and you don’t come across like an idiot, then I’ll respond to you. It seems so simple, but it’s really not.

I always find it very weird that you can always tell a lot about someone from one picture, or the type of hat that they’re wearing, or the way their facial hair is—if it’s messy or really clean-cut, what does that say? And I don’t care how attractive you are, shirtless pictures are an automatic turnoff.

I don’t care how attractive you are, shirtless pictures are an automatic turnoff.

I keep hearing this thing about guys posing for pictures with tigers. Is that a thing that you’ve seen?

Yeah. Girls do it, too. Posing for pictures with, like, exotic animals, and in front of national landmarks and wonders of the world. Like Machu Picchu. There’s like 5,000 people in front of Machu Picchu on OkCupid, I swear. (laughs) It’s a really weird thing.

Do you put a lot of thought into the photos that you use?

No. Not a lot of thought. Without trying to sound conceited, I take good pictures, and I’m a makeup artist, and I know my light and what makes a good, quality picture. Don’t post a picture that looks blurry, you know? It’s the same thing with Instagram. The reason I got a lot of followers is because I put up decent pictures, whether they’re of me or a street or a scene somewhere. Not, like, a filtered-out whatever.

What, if anything, do you feel like has changed in what you’re looking for in a guy since you’ve been online dating?

It’s definitely made me want someone [who is] very secure and confident in themselves, because with all the attention that I’m getting, they can’t be jealous in any way. And I’m also looking for someone who’s successful themselves and is striving to do cool things.

Obviously, I’m only 25, so I realize that I’m young, but a lot of girls in New York are much more mature than guys for their age, so I typically date guys 10 years older than me. But sometimes I think, “Maybe I should try dating a 29-year-old and see what happens,” and they’re still living with three roommates.

I need someone who’s living alone and has a real job or is aspiring to do something. They don’t even need to make that much money; it’s just really about having goals and a passion for something other than facial hair. And that’s surprisingly hard to find. It’s a rough world out there.

Do you ever use Tinder when you’re traveling outside of New York?

I’ve tried, actually, but there’s nobody anywhere unless you’re in a major city, you know? The few places I’ve gone have been in the middle of nowhere, so it doesn’t really work.

But recently, when I was in Arizona, I went to an observatory and I met this physicist. And I got to hang out with him for a couple of days. Don’t get me wrong, I meet people in person still, but it was outside of my comfort zone to approach someone. He was lecturing, and then after the lecture, I went up to him and asked if he wanted to hang out. He showed me around Flagstaff, and we got lunch before I had to fly out. It was nice.

And keep in mind, I wasn’t wearing makeup when I was there—I was wearing workout clothes and going hiking every day—and then I got home, and of course we followed each other on social media, so now he’s seen all of this crazy shit. I’m, like, “Yeah, this is that dirty hiking girl you met.”

Have the experiences you’ve had with online dating made you realize anything about gender roles? And do you identify as a feminist?

Yeah, definitely. There’s a short little essay about feminism in the book. I believe in being happily single, which has a lot to do with feminism. I can have this amazing career and awesome friends and date as much as I want, so I think that naturally fits in.

And I also write about marriage and kids in the book. Just the other day, I got in a heated debate with a girl who said I’m not living my life if I don’t have children. (laughs) So obviously that ties feminism in quite a bit. She’s like, “Who’s going to carry your legacy?” And I’m, like, “Oh my god. First of all, I’m not telling you that you shouldn’t have kids, that the world is overpopulated. Do whatever you want, if it makes you happy! I’m not telling you what to do, so don’t tell me what to do.”

People get frustrated with online dating pretty quickly. What do you think has kept you optimistic about it?

It’s not like everyone online is bad—’cause the people that are online are me, and probably this girl over there. I met my ex-boyfriend online—he was a great guy—and I’ve met other cool people online. It’s definitely frustrating when you see the constant misspellings of words and stupid messages. But you just have to realize that not everyone sucks.