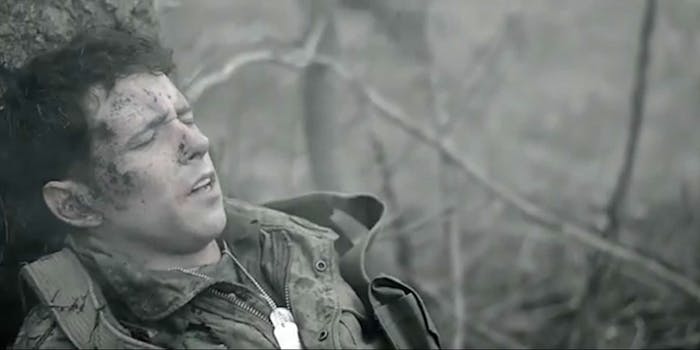 Mormons went ahead and made this helpful anti-masturbation video

OK, so the logic in this Mormon anti-masturbation video might be a bit difficult to follow. Nonetheless, for those of us who spent our teenage years choking the chicken and paddling the canoe without suffering any lasting damage (except maybe wearing out the batteries on our vibrators a few times), it’s pretty hilarious.

Produced by the Housing and Student Living department at Brigham Young University Idaho, the clip begins with a tracking shot of an young gentleman walking home and logging onto his computer, accompanied by a voiceover from BYU president Kim B. Clark:

The temptations of the great war are many. The battles are real, and the strategies are clever. The enemy is cruel, ruthless, and relentless. We must not underestimate the danger. We must be vigilant and valiant.

The boy in the video (who is super cute and might make you want to launch a cruel, ruthless, and relentless siege to get in his pants), gets addicted to pornography. He disavows the Mormon lifestyle, stops going to church, and “there is darkness in his eyes.”

What follows is an epic, moderately high-budget, Saving Private Ryan–esque battle scene, revealing that the boy is wounded on the battlefield. Against the advice of a fellow soldier, and at great personal peril, a soldier who sees the boy in the distance runs to save him. The scene then cuts to the boy’s roommate knocking on his door and having a cozy sit-down chat about the dangers of masturbation, which in any other movie would lead into them passionately kissing and running their hungry hands over each other’s supple young bodies, but because it’s this stupid boring movie it just cuts to shots of white kids drinking soda and playing pool.

The moral of the story, according to President Clark? “Don’t be silent. Don’t leave the wounded on the battlefield.” Which is a great, uplifting message in the context of active combat, but probs not so helpful if your roommate is quietly rubbing one out behind a closed door. In which case, it’s probably a better idea to keep the wounded on the battlefield until they’re good and ready to finish.