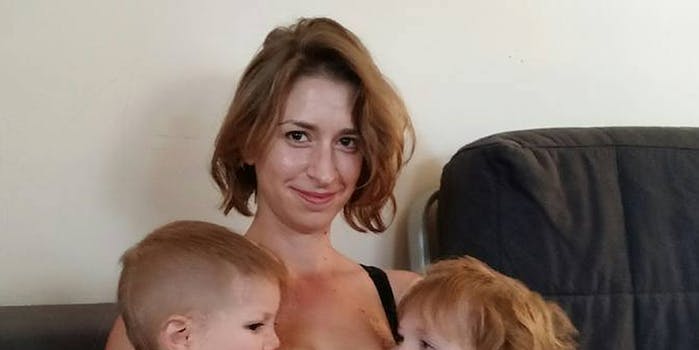 Mom's act of breastfeeding her friend's son has attracted plenty of haters. It's also educating the public.

It takes a village to raise a child, so the widely acknowledged adage goes. But as one pair of friends recently found out, when it comes to breastfeeding others’ children, the idea is still a little—ahem—hard to swallow for many.

In celebration of World Breastfeeding Week, Pennsylvania mom Jessica Anne Colletti, 27, posted a photo of her breastfeeding not only her own young son but also her friend’s son last weekend on Mama Bean Parenting, a pro-breastfeeding blog. And though the proud mama was met with plenty of praise for the selfless act, the post also attracted its fair share of controversy, with many voicing their opinions about Colletti’s actions.

While others may decry her decision, to Colletti, nothing about the act could be more natural:

Breastfeeding my friend’s son came naturally to me,” she tells Mama Bean. “I started babysitting him when he was 5 months old and the first time she dropped him off to me I asked permission to nurse him, since I was already nursing my 3 month old. She responded with an enthusiastic yes, because he was having issues with the formula his previous sitter had been giving him. My friend struggled with breastfeeding in the beginning and succeeded for 9 months. She was always very happy that her son had the nutrition and comfort he needed while she was working. Being able to breastfeed her little boy has created a special bond between us all, a bond I will always cherish.

As Mama Bean points out, the World Health Organization’s Global Strategy On Infant And Young Child Feeding lists the “best alternatives” to direct breastfeeding as the following, in order:

“So factually speaking, a healthy-wet nurse is the second best alternative to direct breastfeeding. And for moms who struggle to pump that elusive 2000 oz of breastmilk, or who are negotiating the phenomenon of Pumping Disappointment, the option of wet-nursing could be the perfect solution,” the blog’s authors write.

As some of the comments on Facebook have been quick to explain, wet nursing has been a commonly accepted practice for centuries, even though it’s one that has been largely left out of the public sphere of consciousness today.

Colletti tells people that she believes that much of the negative commentary her post has garnered is because people are misinformed and fear the act because they don’t understand it.

“They think it’s gross bodily fluid that shouldn’t be shared or transferred in any way,” Colletti told People. “And I can understand, if people are receiving donated breast milk, they want to have it tested, but if you know the mother directly and she’s healthy, and you know everything about her, it’s a perfectly healthy relationship to have.”

This is far from the first time women have been publicly criticized for posting photos of themselves breastfeeding online—one woman recently responded by posting more photos of herself breastfeeding when her Facebook photo was reported for nudity—but her and Colletti’s posts are part of a growing trend of acceptance when it comes to normalizing the act.

Facebook’s community policies explicitly permit breastfeeding photos, and Instagram, which has something of a complicated relationship with photos of female breasts, recently celebrated World Breastfeeding Week by posting a photo of a baby breastfeeding on its official page on Wednesday.

After 1-year-old Dread took a bad fall, mom Laurel Creager (@motherofthewild) soothed him in a way only she could — by nursing. “My husband actually thinks of breastfeeding like a magic wand,” she says. “Breastfeeding has changed me as a person. [It] has given me so much respect for the female body.” Laurel, who is a drummer, seamstress and self-described “tech nerd,” would call both her kids daredevils. “The wild” is Laurel’s nickname for Dread’s 4-year-old sister Vera, who recently decorated her own hair with clothes hangers and once moved their living room furniture in order to jump from tables to chairs. Their family also has four hermit crabs, two dogs, two rats and a guinea pig, meaning Laurel never runs out of adorable material for pictures. But documenting her family’s life is more than entertainment. Laurel’s mom passed away shortly after Vera was born, and didn’t leave behind many personal photos. “I feel like I am leaving a footprint,” Laurel says. “Like my children will never have to question how much they meant to me or what activities we did together. They are my world, and the unconditional love I receive from them is so beautiful.” This post is celebrating World Breastfeeding Week 2015. Photo by @motherofthewild