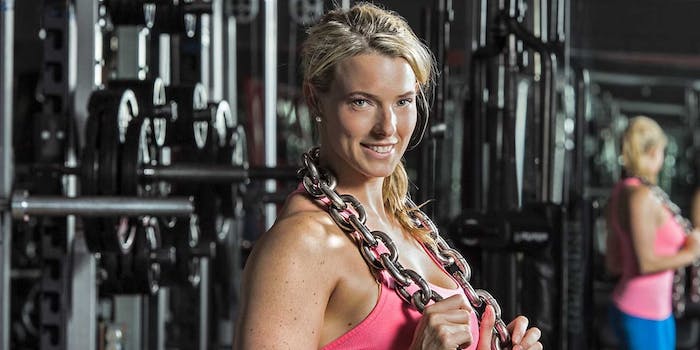 She has "NO resolutions to change the way [her] body looks."

In light of the new year, it sometimes feels like we’re being bombarded with messages encouraging change. In contrast, Molly Galbraith’s body-positive Facebook post shares her goal for 2016, explaining that she has “NO resolutions to change the way [her] body looks.” Loving and accepting your body is a resolution I’d definitely love to see more of, and it’s inspiring to see a woman share her message on social media, where women are routinely subjected to criticism, judgment, and harassment.

Of course, resolutions are personal, and there are no right or wrong ones: For some people, fitness journeys are ones of both emotional and physical growth, and those New Year’s goals are commendable and respectable for those people. That said, Galbraith’s post is admirable and inspiring in its authenticity and vulnerability, especially concerning a subject as intimate and sensitive as body image.

The Facebook post, shared on Jan. 1, includes what is not an uncommon image in our social media streams: A woman (Galbraith, in this case), in a bikini, standing on a beach. What’s atypical about Galbraith’s post, however, is her inspiring message. In the caption, she writes, “This not a before picture. This is not an after picture. This just happens to be what my body looks like on a random Tuesday in December of 2015 — it’s a LIFE picture.” In an age where many of us take great care in perfecting our social media image and presence, these word feel genuine and authentic, as well as radical: Instead of aspiring to change herself, Galbraith aspires to accept herself, and that’s a wonderful and inspiring thing to pursue.

Just how rare is this acceptance and honesty on social media? In a 2014 survey on social media and self-esteem conducted by Dove, researchers discovered “women are 50 percent more likely to say something negative (rather than positive) about themselves on social media”— which really makes me step back and appreciate Galbraith’s courage in her photograph and caption. An even crazier find from the survey? Roughy “82 percent of women believe social media is influencing how we define beauty today,” which means it’s no surprise that #fitspo and #cleaneating can easily progress from inspiring to overwhelming, especially around the New Year.

Galbraith’s post goes on to discuss specifics about her experience with body image. She writes that her body has been “publicly evaluated, judged, and criticized”—which is, unfortunately, too relatable a sentiment for many women. In fact, studies show that 87 percent of girls and young women believe they’re judged more on their appearance than their abilities. Galbraith goes on to say, “Those judgments have been used to determine my level of skill as a coach and a trainer, and my worth as a person, both positively and negatively,” before going on to share some (heart-wrenching) specifics about just what kind of feedback she’s gotten on her body: “Some people say they would ‘kill to have this body.’ Others say they would ‘kill themselves if they had this body.’ (Yes, unfortunately that’s actually a thing humans say to one another.)”

In a world where women criticize themselves eight times a day, and on average spend an entire two weeks a year on their appearance, any attempt at body positivity and self-acceptance is definitely an act of bravery. Accepting one’s self, especially when you identify as a woman, can feel impossible between messages from the media and society’s unrealistic expectations of women’s bodies, but Galbraith leads the pack with her acceptance, honesty, and bravery.