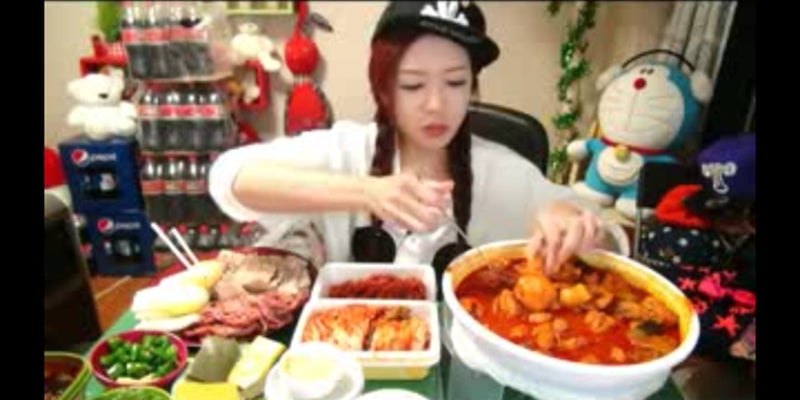 The latest online trend in South Korea: Livestreaming your dinner

South Korea’s taken indulgence to the next level.

Instagram food photos tend to indulge the setup, a composed photo of what and where we’re eating. But they’re often missing a human component. South Korea’s taken indulgence to the next level.

The phenomenon of “mok-bang” documents South Koreans eating large quantities of food while broadcasting or live-streaming the event. The video channel Afreeca TV hosts many of the videos, created by popular personalities or “broadcast jockeys.” The network’s made celebrities out of some of these BJs, such as The Diva, who streams her evening meals for anywhere between two and four hours. She can also be found dancing to Korean pop on the channel. In fact, many of the channel’s most popular broadcasters are women eating plates of food while answering questions from viewers.

Afreeca TV also uses a “gift economy” as its business model. Viewers can “gift” BJs a virtual currency of Star Balloons, which cost roughly ten cents each, and can be cashed in for real Korean currency. So, essentially, viewers can determine the value of the live broadcast they’re watching, and the talent can actually make a living off eating food on camera, which can fund future glutunous broadcasts. Like a snake eating its tail until it explodes.

The Korean site Dailian claimed the popularity of dinner broadcasts might be due to young people wanting to avoid eating alone, and finding some special interaction or conversation over a virtual dinner table. Next to gaming, mok-bang is one of Afreeca TV’s most popular channels.