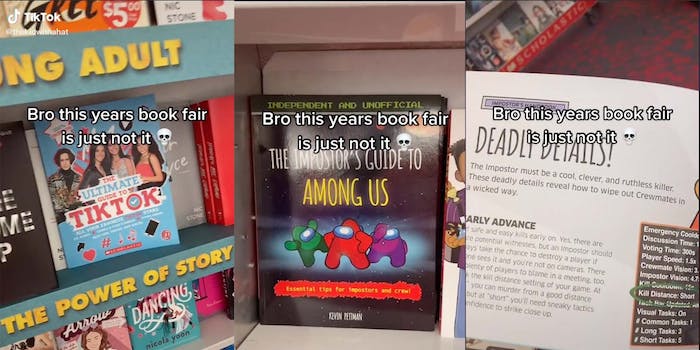 ‘Not a single Diary of a Wimpy Kid in sight.'

Nostalgia for the Scholastic Book Fairs of the ’90s and early aughts has taken TikTok by storm. TikTokers remember asking their parents for money for the fair and buying sparkly pens, editions of the Guinness Book of World Records as well as Ripley’s Believe It Or Not!, and chocolate calculators.

Others are just stumped that Scholastic’s in-person fairs happened so long ago: TikToker @the.sequel.nobody.wanted posted a video about finding out that Rick Riordan’s first Percy Jackson novel, which they bought at a book fair, came out in 2005.

@bookish.donald, a BookToker, even said that the Scholastic Book Fairs taught him “the value of money.”

But a TikTok video @thekidwithahat alleged that 2021 book fairs just don’t measure up.

“This [year’s] book fair is just not it,” wrote @thekidwithahat in the overlay text of the video. The TikTok shows two books, in particular, being sold at the fair: The Ultimate Guide to TikTok and The Imposter’s Guide to Among Us.

TikTok users in the comments section of @thekidwithahat’s video expressed their disappointment.

“Not a single Diary of a Wimpy Kid in [sight],” @yeezits wrote.

“Where are the invisible pens, the chocolate calculator, the money erasers,” @lemonbpink questioned. “Smencils, and the world record books?”

“It went from spy kits to How To TikTok?” @daisydubz quipped.

Others debated which book fair era was superior: @thekidwithahat said 2013-2019, but many were partial to the fairs prior to 2010.

But @clop260, another TikToker who made videos about the book fair, said the ’90s fairs were the best.

@thekidwithahat did not immediately respond to the Daily Dot’s request for comment via TikTok comment. The Daily Dot reached out to Scholastic Book Fairs via email.