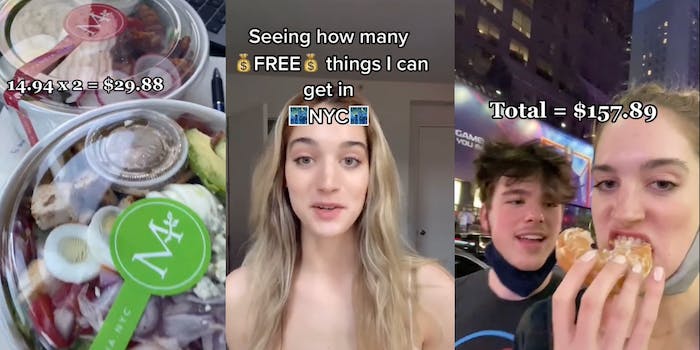 ‘This is so tone deaf’: Model criticized for TikTok showing off free stuff she gets in NYC (updated)

'I thought this was going to be all about cool things I could get with my vaccination card but alas, I’m not a model.'

A model’s TikTok showing the free items she can get in New York City is sparking debate online about who is entitled to complimentary items from businesses.

Liz Seibert regularly posts content about her life as a model in NYC. On May 19, she posted a video detailing all of the free stuff she received in one day, mostly using the Beauty Pass app.

Through the app, Seibert revealed that she got an açaí bowl, two salads, and two gourmet cupcakes for free. Additionally, she received two free donuts from Krispy Kreme for being fully vaccinated, used her complimentary “influencer” gym membership, and finessed her way into a comedy show without charge. In total, she says she got $157.89 worth of free product.

The video has since racked up over 2 million views. People in the comments of her TikTok were divided about whether it’s fair for Seibert to receive free perks for being a model. Some called it “pretty privilege” and inaccessible to many.

“This is so tone deaf,” another said.

“I feel like the beauty pass thing is making me icky, they could be using this for homeless individuals/families,” one viewer wrote.

“I thought this was going to be all about cool things I could get with my vaccination card but, alas, I’m not a model,” popular TikToker @nicemichael said.

Others said she’s just reaping the benefits of her job and that it’s not her fault that companies give exclusive access to models. Some defenders even accused her critics of “virtue signaling,” or expressing opinions with the intent to show good character.

“Y’all have no idea how hard she actually works,” one person said. “You’re also acting like she created the app. If the vid wasn’t helpful, it wasn’t for you.”

“This isn’t really her fault and she’s just one of the thousands of ppl who benefit from this,” a user commented. “Complain about those people and companies who made this system because that way you can see actual change. Y’all literally are just being performative.”

“Virtue signaling,” TikToker and former model @marcsebastianf wrote in response to a handful of critical comments. “I’m tired of y’all policing peoples content,” he said under one reply.

In response to one commenter asking why models deserve free food as opposed to teachers or healthcare workers, Seibert said “I see your point and agree! But it’s just because it’s cheap marketing for the brands because we post about it.”

In an email to the Daily Dot, Seibert explained that she posted the video for primarily entertainment purposes.

“I show my followers what my life is truly like as a fashion model, and this video is admittedly a more glamorous example of that,” she said. “However, what I want viewers to understand is that while this may seem glamorous, most fashion models, including myself, struggle to support themselves financially.”

She expected the video to “spark conversation” but said some people may have misconceptions about what goes into the exchange between businesses and models.

“I think what most of the viewers of this video didn’t understand was that models get free items in exchange for posting about them on our social media pages,” she added. “That video I posted was actually a way of me promoting those small businesses as well! We do get the items for ”free’, but really the items are a form of payment in exchange for genuine social media marketing.

Another person suggested that Seibert should try challenging herself to getting comped stuff without the help of Beauty Pass.

This story was updated on May 27 to include a comment from Seibert.