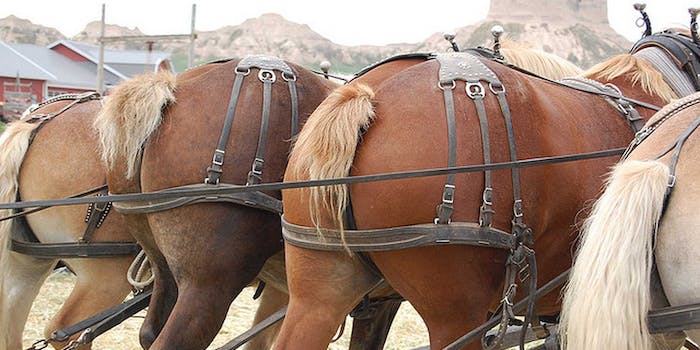 The Columbia Pachyderm Club does not take official stands on political issues, but its President Frederick Berry decided to take one of his own: Sorority girls have nice butts.

On Sunday, the leader of the local Missouri conservative political organization tweeted a photo of young women’s backsides at Missouri University’s homecoming parade. Mizzou’s Delta Gamma sorority members were the owners of said butts, and they pleased the 69-year-old man.

For those unfamiliar, “VNB” stands for “very nice butts.”

According to Berry, this is all a big misunderstanding, and everyone just needs to relax. He explained the circumstances of the controversial tweet to the Columbia Daily Tribune:

On Saturday morning, Berry said, he and a woman in his group began discussing the sorority members.

“She said, ‘All those girls are wearing these nice sleek pants, but I think in our day we were in better shape,’ ” Berry said. “I said, ‘No, we weren’t. You can tell by the way they are walking. You can see all the muscles there.’”

“VNB” was a comment “on their obvious athletic build,” Berry said.

The tweet still remains public on Berry’s account, and he’s not backing down, even after the Mizzou College Democrats issued a news release Monday morning calling for his resignation.

“I think a lot of this is hypocrisy,” Berry told the Columbia Daily Tribune. “This is political, and they want to embarrass me and the people I am associated with.”

The women of Delta Gamma responded to the inappropriate tweet online, calling it “disturbing.” “To promote development of potential leaders and to assist in carrying out the principles and purposes of the Republican Party in the following fields of leadership in government, individual rights and freedoms, clean government with local emphasis, and an informed public on the status of government and the issues of the day.”

And for Berry, the issue of the day was butts.