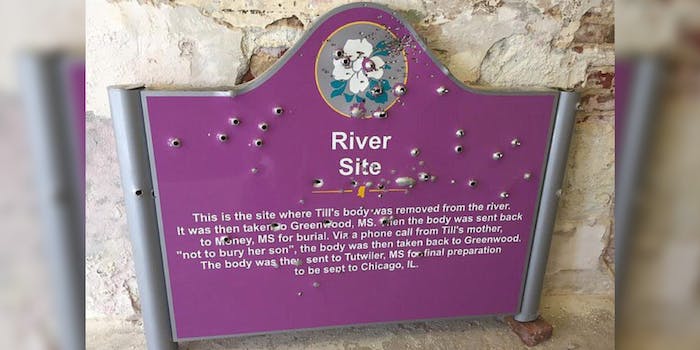 Three members of a University of Mississippi frat have been suspended from the organization after posing in front of the Emmet Till memorial with guns and posting it on social media, ProPublica reported.

One of the Ole Miss students posted the photo on his Instagram account in March, which at first received hundreds of likes.

The photo shows the three young men smiling in front of Till’s memorial, surrounded by a patch of grass. Two of them are on both sides of the bullet-riddled sign, each holding a rifle; another one is sitting at the center. The photo was obtained and published in a partnership between ProPublica and the Mississippi Center for Investigative Reporting.

Two of the students have been identified in the reports as Ben LeClere and John Lowe of the Kappa Alpha fraternity.

A bias report was filed less than a week after the photo was posted, by a student who was disturbed by it.

“The photo is on Instagram with hundreds of ‘likes,’ and no one said a thing,” read the complaint. “I cannot tell Ole Miss what to do, I just thought it should be brought to your attention.”

Although the photo was posted in March, and so was the complaint, Kappa Alpha only suspended the students on Wednesday, terming the photo “inappropriate, insensitive and unacceptable.” The frat maintains Confederate Gen. Robert E. Lee as its “spiritual founder” and sponsored a Halloween party where students wore Blackface in 2002, according to ProPublica.

The photo was only removed from the Instagram account after ProPublica and the Mississippi Center for Investigative Reporting reached out to LeClere and Lowe for comments.

LeClare reportedly posted the photo on his Instagram on Lowe’s birthday on March 1, with a caption, “one of Memphis’s finest and the worst influence I’ve ever met.”

The university told ProPublica that they received a copy of the photo in March and turned it over to the school police, and the case has gone to the FBI. The school has not taken any action against the students.

U.S. Attorney Chad Lamar of the Northern District of Mississippi in Oxford told ProPublica the incident is now being reviewed by the Justice Department’s Civil Rights Division.

The memorial, which was erected in 2008, has been repeatedly vandalized—and replaced—over the years, often shot at. It’s currently awaiting its fourth sign to be installed, as the third one, seen in LeClere’s photo, was taken down due to damage from 10 bullet holes.

Thursday marked what would have been Till’s 78th birthday.