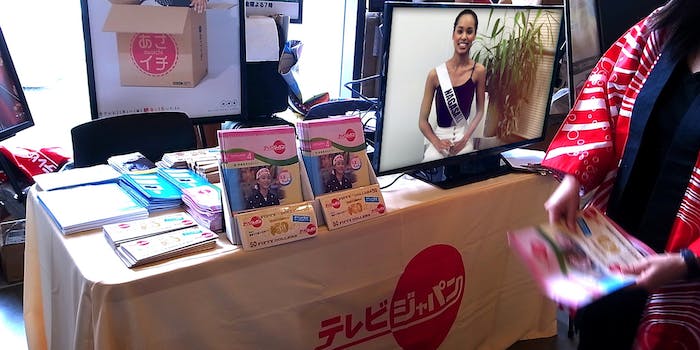 What it’s like to be ‘hafu,’ or half-black, in Japan

The backlash against Miss Universe winner Ariana Miyamoto reflects the struggle of biracial people in Japan.

Ariana Miyamoto should be on top of the world right now. After all, the 20-year-old was just selected to represent Japan in the 2015 Miss Universe pageant.

But almost immediately after the biracial beauty was crowned, she was forced to defend herself against critics claiming she wasn’t Japanese enough.

Miyamoto is the daughter of a Japanese mother and a black American father. She was born and raised in Nagasaki and is a Japanese citizen, which, by all accounts, makes her Japanese. But no matter what her birth certificate says, the fact that she is biracial makes her less than in the eyes of Japanese traditionalists. They even have a derogatory word for it: hafu.

today I see a hafu was crowned Miss Universe Japan. I mean, I guess that's one way to discourage Japan's homogeneous population

Dad just found out about the biracial Miss Universe Japan.

Japan is a largely homogeneous country. According to the Japanese Ministry of Health, Labor, and Welfare, fewer than one out of 150 babies born in 1987 were biracial, and 2.1 percent of marriages during that year were interracial. Those numbers have changed in recent years, with one in 50 babies and 3.5 percent of marriages in 2012 being biracial. But compared to other countries, these figures are still quite small.

The idea of somehow having allegiance to one race or another stems not just from the country’s culture, but also from the government. Children who have dual citizenship in Japan and another country are not allowed to maintain that status after the age of 22, thanks to a 1984 amendment to the Japanese Nationality Act. They must surrender their foreign citizenship and choose to be a full Japanese citizen, or surrender their Japanese citizenship in favor of their other nationality.

A 2013 article in The Diplomat explained this decision:

Japan is a jus sanguinis country, meaning that citizenship is based on blood, not location of birth. With an increase in the number of mixed-race couples giving birth to children with dual citizenship, the government decided that restrictions were necessary to preserve national sovereignty.

Back in 2010, Glenn Newman, an American lawyer and long-term resident of Japan, wrote an open letter to a member of the Japanese House of Councillors in the Diet on behalf of his three daughters, who grew up in Japan and later moved to the U.S.

What does Japan gain by, in effect, rejecting my children and thousands of other young dual citizens living in Japan and around the world, at the very moment when they come of age and are at last able to become productive members of society?

Best as I can figure, the only virtue of the “one citizenship fits all” rule is simplicity.

What does Japan lose by rejecting dual citizenship?

My daughters, for one thing (and that’s a big loss; I know, I know: oyabaka),along with many other repudiated young people whose capacity and willingness to contribute their talents, creativity, fluency in English and other languages, international experience, energy and human and financial capital to Japan as full-fledged members of society are suppressed, or snuffed out altogether, by continuing a short-sighted, anachronistic policy.

Much like in the U.S., the people of Japan seem to be tone-deaf to the fact that they have a race issue. A 2013 video made by Miki Dezaki, an American teacher living in Japan, caused major waves because of his claims about racism in Japan. He asked his students to raise their hands if they thought racism existed in the country and only a few did. He channeled his disbelief into this video:

After posting the video, Dezaki received angry comments and even a death threat. He talked to the Washington Post about the experience at the time:

“I knew there were going to be some Japanese upset with me, but I didn’t expect this magnitude of a problem,” Dezaki said. “I didn’t expect them to call my board of education. That said, I wasn’t surprised, though. You know what I mean? They’re insane people.”

The issue of racism toward beauty queens is not limited to Japan. Back in 1983, Vanessa Williams received death threats and endless hate mail after she was crowned the first black Miss America in the pageant’s history. And in 2013, Miss America winner Nina Davuluri was also met with an onslaught of racist tweets and harassment after she won the crown. Although Davuluri was born in New York and is of Indian heritage, thousands of Americans nationwide were angered by her victory, arguing that she was not a “real” American.

But for all of those upset about Miyamoto representing Japan in the Miss Universe pageant, there are countless others who are happy to see biracial people represented on a world stage.

Shoutout to the hafu who one miss universe japan. Fuck the haters.

So happy Miss Japan is a "hafu" just like me, and even better shes from Nagasaki!

One small step for beauty pageants. One giant leap for mankind.