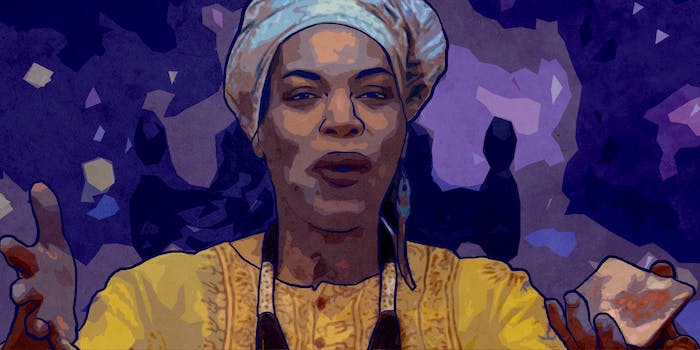 The staple of TV infomercials passed away in Florida this morning.

In horrible news for mystics, tarot enthusiasts, and watchers of late-night infomercials, the legendary Miss Cleo has passed away at the age of 53. Born Youree Harris, Miss Cleo had been suffering from cancer when she died this morning in Palm Beach County, Florida, according to TMZ.

Miss Cleo operated as a pay-per-call psychic from 1997-2003, and her iconic TV spots were a staple of late night television. She offered to reveal cheating boyfriends, secret family members, and new futures to callers in need of answers to life’s mysteries.

Online, many are have nothing but respect for the iconic figure and are upset about the loss.

Reading the cards from the great beyond now. #MissCleo https://t.co/xEp05Ho0a0

You can tell who all the young people are when they ask "Who's Miss Cleo?"

I ran up a pretty big phone bill calling Miss Cleo when I was 20. I guess it helped in place of not having insurance for a shrink.

Harris was born in Los Angeles and worked as an actress, but she adopted the Jamaican accent for her character when she began working with the Psychic Readers Network. Her Miss Cleo character took off, and eventually landed her gigs voicing a character for Grand Theft Auto, and as a spokeswoman for the TV network Fuse.

In 2002, Harris and PRN were charged with deceptive advertising and billing by the FTC, after charging customers hundreds of dollars for services they were led to believe were free. For Slate, Dahlia Lithwick wrote about being scammed by the Miss Cleo empire, and was astonished that people weren’t complaining Miss Cleo wasn’t actually a psychic.

“Apparently, people don’t like to look stupid,” Lithwick wrote. “They will tell you they were overcharged but not that they believe in phone psychics. Which means these callers either believe the soothsayers are real, or they know they are being lied to and just don’t want to pay too much for that privilege.”

I believe there is a third option: Miss Cleo was pure entertainment, and her customers knew that. Obviously, being lied to about how you’re being charged is unethical, but as for the life tips, maybe everyone understood that she was not a real Jamaican shaman. Maybe they just wanted someone to listen, to tell them what they already knew about their lives, and to give them permission to act. Miss Cleo provided that.