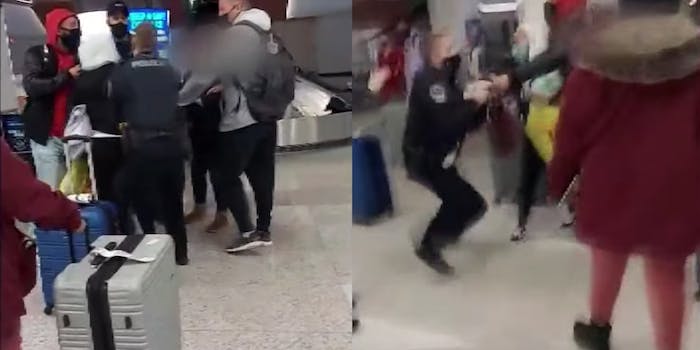 ‘Wrong person’: Video shows Cop detaining Black woman instead of the white woman who was harassing her

Bystanders stepped in to correct the situation.

A white woman who was harassing bystanders at the airport almost got away with it after a police officer targeted the Black woman she was bothering instead.

Video taken at the Minneapolis-Saint Paul International Airport in Minnesota shows a white woman going up to various people at baggage claim and hassling them for no apparent reason.

At the start of the footage, obtained by KARE 11, she can be seen demanding to know if a man carrying a long piece of luggage has guns in his bag. Not long after that, she yells at everyone in the area that they are “stupid” and should take off their masks, blatantly causing a massive public disturbance.

It wasn’t until a little bit later that a single police officer showed up.

At that point, the white woman approached another group of people, including a Black woman and her husband. It’s impossible to make out their conversation in the KARE 11 video, but a police officer literally runs in from off-screen and grabs the Black woman’s arm, dragging her away.

The group of travelers attempts to defend her as the cop refuses to let go, and the person recording the video moves in to yell “wrong person” in an attempt to diffuse the situation.

According to reports, it took roughly 13 seconds for the officer to stop pawing at the Black woman and instead turn his attention on the white woman who had been disturbing the peace the entire time.

The woman who was originally targeted by police believes she was a victim of racial profiling, while the Metropolitan Airports Commission insists that the officer was simply acting on information he had been given by another bystander.

“In the confusion of the moment and based on his understanding of information provided to him by a passenger present, the officer misidentified who had initiated the disturbance and engaged one of the two individuals whom [the woman] had confronted,” it said in a statement to KARE 11. “Bystanders corrected the officer who quickly turned his attention on [the woman].”

Ultimately, the white woman who initiated the altercation was arrested for possession of drugs, obstruction, and disorderly conduct.

KARE 11 reports that the unfairly targeted woman has obtained a lawyer as the incident is investigated further.