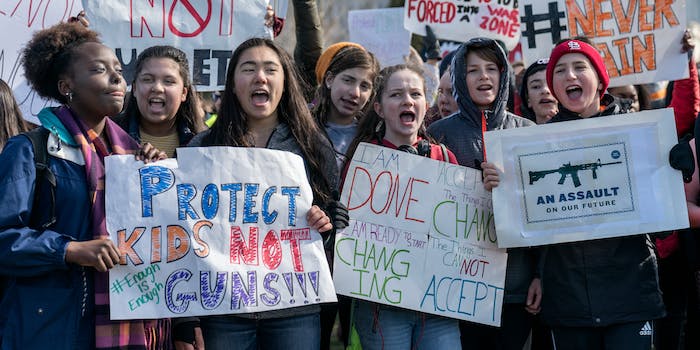 Both generations grew up with school shootings—but only one is walking out of class over it.

I remember the first time my teacher told us about lockdown drills. It was 2005, and I was in fifth grade. In Red Lake, Minnesota, a 16-year-old killed five students, a teacher, and a security guard, then turned the gun on himself. This was six years after Columbine.

To prevent the same from happening at my New Jersey public school, we would barricade ourselves in the classroom, turn off the lights, hide in a corner, and hope the police would find us first.

These days, the name “Red Lake” feels more like a feeling than an event, a moment in the news eclipsed months later by Hurricane Katrina. But even when I was in fifth grade, I understood that something was changing in schools. Columbine wasn’t an outlier anymore. School shootings were becoming the norm. And that meant it was our responsibility to learn how to survive one.

As the years went on, lockdowns became a part of life. On some level, we all accepted the fact that any day at school could be our last. So by the time we were seniors, we figured protesting against gun control was useless. The NRA is huge. Politics are complicated.

If we couldn’t win, then why bother fighting at all?

(Most) millennials dropped the ball 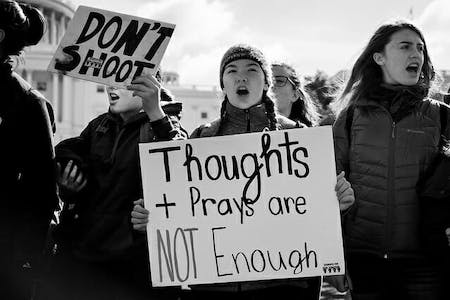 Millennials like to complain a lot about Baby Boomers, and often for a good reason. In Bruce Gibney’s book A Generation of Sociopaths, he argues Baby Boomers engaged in “generational plunder,” destroying the American economy and letting social issues like climate change languish over the years. Thanks, Dad.

But if Boomers messed up the world, then Generation X screwed up our minds. Vice’s Theis Duelund argues Generation X taught millennials how to tune inward and live for nothing but themselves. That’s because Generation X is “based on a philosophy of resignation” in which being hip matters and “not giving a fuck is the only truly meaningful personal act.” Those values were passed on to us over time, motivating us to drop out of politics and live for ourselves.

That’s not to say all millennials are mindless slaves, eager to splurge their money on the latest Supreme streetwear. In fact, millennials made up 25 percent of the electorate during the 2016 presidential election, Pew Research Center reports. And thanks in part to President Donald Trump’s incredibly unpopular presidency, one study suggests that our generation is anticipating the midterm elections at a much higher rate than in previous years.

But millennials have a pretty low voting track record as a whole compared to our Gen X cousins and Baby Boomer parents. In May 2016, another Pew Research Center study showed that only 46 percent of eligible millennial voters came out for the 2012 presidential election, and a mere 50 percent turned out for Obama’s 2008 run. In comparison, 69 percent of Boomers voted both years, as did 61 percent of Generation X. Our parents and older brothers may have ruined our lives, but they’re also more likely to put their politics where it matters and vote.

🗣 THE STUDENTS IN HIGH SCHOOL NOW ARE NOT MILLENNIALS.

While I am proud of and support their efforts to fight gun violence, it is just incorrect to keep writing about them as millennials. The youngest millennials just turned 21 this year.

Millennials, especially white millennials, have historically avoided heading to the polls for the same reason that we didn’t organize our own National School Walkout and #Enough campaigns.

As an entire generation, we felt disillusioned with the American political process, choosing instead to roll with the punches and hope the men and women in charge would finally change something. Not all of us, granted. Millennials of color have been protesting for change since before Black Lives Matter, following all people of color who have come before them who have been on the frontlines of fighting for the human right to live.

But many white millennials have been resigned. And now we’re realizing we could’ve done more.

Ryan McGee, an engineer and millennial, turned to Twitter with a harrowing message this week: If millennials had their own National School Walkout during the 2000s and early 2010s, we might not have needed one in 2018. Generation Z is doing the hard work we never wanted to do.

“Don’t quit,” McGee tweeted this week. “Columbine was 1999. I keep wondering how many lives could have been saved if my generation had done what you’re doing now.”

Similar sentiments popped up across Twitter during the National School Walkout. One alumnus pointed out how he wished he had protested for gun control after the Virginia Tech shooting in 2007. Another said she was only a freshman in high school when Columbine happened, and she regrets the fact that she never took a stand for her rights. And yet another pointed to a classic millennial problem: Kids wanted to protest school shootings, but organizers could never get enough students motivated to join in.

From an old millennial, to all the Gen Z students that have been walking out, and protesting.

Columbine was 1999. I keep wondering how many lives could have been saved if my generation had done what you're doing now.

When I was a senior in high school, the Virginia Tech shooting happened. I still went to VT the next semester. That felt like my own form of protest and support.

Ten years later, I realize how little that was. That changes now. #ENOUGH @Sarahchadwickk

Columbine happened when I was a Freshman in High School. I wish we had been brave enough to take a stand like kids all over the country did today. Our future looks damn bright. #Enough #nationalwalkoutday pic.twitter.com/XL8pZzh02F

I completely support these students. There was talk about doing something like this when I was still in school a few years ago, but nothing came of it. We have to stop the fetishization of guns, violence, and war in this country. #Enough #NationalWalkoutDay

When I was that age, i wasn't so brave. My parents probably would've gotten mad at me for even trying to protest. I'm proud of the kids that walked out#NationalWalkoutDay

Message to my peers/young adults: Our age range (18-29 y/o) is the lowest number of votes, MOST don't even vote. Yes, we can continue to march, protest, speak out but the most power is in voting! That's when real change happens so make sure your registered and VOTE, VOTE, VOTE

Millennials dropped the ball on protesting for change during the 2000s and 2010s, but that doesn’t mean the ball needs to stay on the ground or kicked toward the younger generation.

There’s a special bond bridging America’s youth together. Both millennials and Gen Z know what it’s like to have a lockdown drill, and both know what it’s like to see a school shooting in the news and wonder, “Am I next?” For millennials, it was Columbine, Red Lake, and Virginia Tech. For Generation Z, it was Sandy Hook, San Bernardino, and Parkland. The names change, but the fear stays the same. And that’s something that will come in handy by 2020, when Generation Z joins the American electorate to vote alongside their increasingly left-leaning siblings.

But for now, it is up to millennials and all generations to stand with students. As writer Shakti Jothianandan wrote on Instagram, “The children are not our future, they are our present, and we should aspire to be like them.”

Generation Z, we’re sorry we let you down. But you’re leading the way forward for all of us, and it’s a fight we’re willing to join.