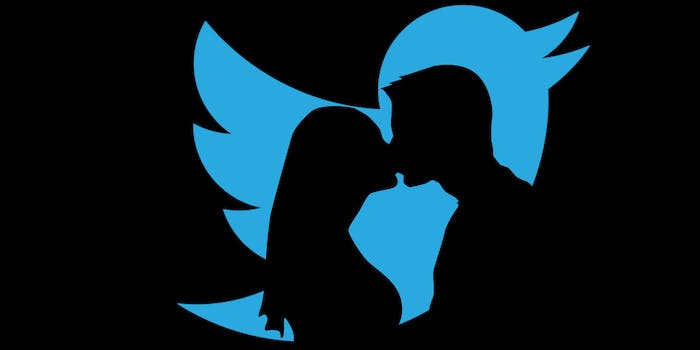 In the inimitable words of Tracy Jordan: "PORNOGRAPHY."

The winners of the four individual brackets get to shoot their own scene for Mile High Media, with the original submitter of the pairing winning a free six-month membership to a Mile High Media studio website.

Launched in 2011, the tournament originated as a way for Mile High Media to generate more Twitter followers by engaging the company’s fans, who consistently besieged the company with requests for who to shoot. “One of the favorite things fans like to do is say, ‘Oh, please shoot this person with that person,’ or ‘We’d love to see this girl work w/ this person,’ or ‘Why don’t you shoot her for this studio?’” says Marie. “So we decided to just give the fans power to cast the scenes they wanna see.”

“Everyone, for some reason, loves making lists and ranking things in order and whittling them down, especially men,” says Marie. “I think that’s probably the main thing that we’ve tapped into with this.”

The tournament is divided into a few stages: After fans submit their picks, the most popular pairings are listed in each region. Fans are then asked to vote for their favorite pairing to ensure they go on to the next round. The winners of each region—and the tournament as a whole—are revealed in April.

Like the March Madness tournament, the submissions vary widely from top-seeded frontrunners (the North Carolinas and Ohio States of the adult world, so to speak) to less-established dark horses.

“We try to get a good sampling of the entire industry,” says Marie. “Obviously we want some of the big names in there, but we also want the transgender performers, the lesser-known girls. We want every fan to feel like there’s a submission they can get behind.”

Unlike March Madness, however, a Mile High Madness victory is predicated largely on the social media efforts of the performers in the pairings, who are encouraged to rally their fans to vote for them, particularly if they are relatively new to the industry. “The newer girls, it seems like, are the ones who are usually guaranteed to win, because they’re tuned into social media, they understand their brand, and they’re really good at interacting with their fans,” says Marie.

Everyone ask @MileHighMovies to put me and @remymeow together for #MileHighMadness. Just don’t get drunk on your moderate amount of power.

“I was very active during the competition, and my fans were very responsive and happy to vote,” says Cade, who promised her fans a custom selfie for every vote she received. “Some of them told me later they were happy to be a part of it, to have this interaction with me and have some input, so it was a lot of fun to engage with them on that level.”

Cade and Hartley’s victory in the Mile High Madness tournament also provided them with the opportunity to expand their horizons as performers. “I don’t know if I would’ve ever shot a one-on-one with Nina if I hadn’t won the contest. We’re both very aggressive, and I’m usually hired with younger girls, to be a top in a scene with someone who has less experience than me,” says Cade. “But I’m really glad it happened, because we were able to have this chemistry and do this scene that was really fun and cool and hot.” (Their scene is featured in Tombois 2 [trailer SFW, kinda?], released by Sweetheart Video last December.)

“Today, in the world of piracy and all that, there’s so much free content that the only way performers can distinguish themselves is if they have a unique product,” says Marie. “What we’re seeing is that through this contest, instead of being like, ‘Oh, I’ve never worked with her, who is she?’, the girls are establishing themselves by getting their fans to vote to them, and once they’ve established they have a solid fan base, other studios start shooting them too. So it works both ways for both them and their fans.”

The first round of voting for Mile High Madness begins today. Votes can be cast via Facebook, Twitter (under the hashtag #milehighmadness), and email at [email protected]. Winners will be announced April 14.