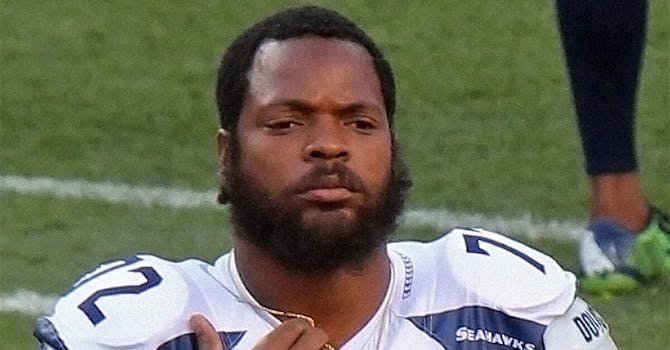 ‘I’m going to die for no other reason than I am black.’

Seattle Seahawks player Michael Bennett is accusing police officers of using excessive force and pointing a gun at him during an incident in Las Vegas last month.

Bennett posted a statement to Twitter Wednesday. He said officers pinned him to the ground, pointed a gun near his head, and warned they would “blow [his] fucking head off” if he moved.

“The Officers’ excessive use of force was unbearable,” Bennett wrote. “I felt helpless as I lay there on the ground handcuffed facing the real-life threat of being killed.”

TMZ Sports posted a video of the arrest. As he’s on the ground being handcuffed by the officer, Bennett can be heard saying, “I wasn’t doing nothing, man.”

Bennett, who was in Las Vegas for the Mayweather-McGregor fight, said a crowd of “several hundred” people began to run after hearing gunshots on the street. Bennett said police officers “singled [him] out.”

Bennett wrote that after sitting in the back of a police car, officers realized who he was and released him “without any legitimate justification for the Officers’ abusive conduct.”

“I sat for what felt like an eternity until they apparently realized I was not a thug, common criminal or ordinary black man but Michael Bennett a famous professional football player,” he wrote.

His brother Martellus posted to Instagram about receiving a call from Bennett after the incident.

“I could hear the fear in your voice, the tears in your eyes as well your sprinting heart beat,” Martellus Bennett wrote.

Via @mosesbread72 the call that night was a scary one. The emotion and the thought of almost losing you because of the way you look left me in one of the saddest places ever. I could hear the fear in your voice, the tears in your eyes as well your sprinting heart beat. I can't imagine how the people who lost their loved ones felt when they got the call. A lot of people feel like it couldn't happen to them because of status, neighborhood ("tghat only happens in the hood") or whatever, but it all honesty YOU could be next. I COULD BE NEXT. YOUR SON, DAUGHTER, BROTHER, FATHER, GRANDPA, SISTER, COUSIN could be next. I'm sad that you have to share this type of experience with the world but at the same time I'm happy that it happened to you and you lived to talk about it because we all know you're going to talk about it. Lol. The conversation is growing and I'm glad your voice is one of the ones being heard. You are as real as they come, well at least how they used to come. I encourage you to Continue telling your story and the stories of those that came before. I love you very much @mosesbread72 to me you're much more than a nigger.

Former NFL quarterback Colin Kaepernick, who has taken a bold stance against racism and politice brutality, called the incident against Michael Bennett “disgusting and unjust” in a Twitter post.

This violation that happened against my Brother Michael Bennett is disgusting and unjust. I stand with Michael and I stand with the people. pic.twitter.com/TqXFiso6lk

In his statement, Bennett said he has retained civil rights attorney John Burris to explore legal options against the Las Vegas Police Department.