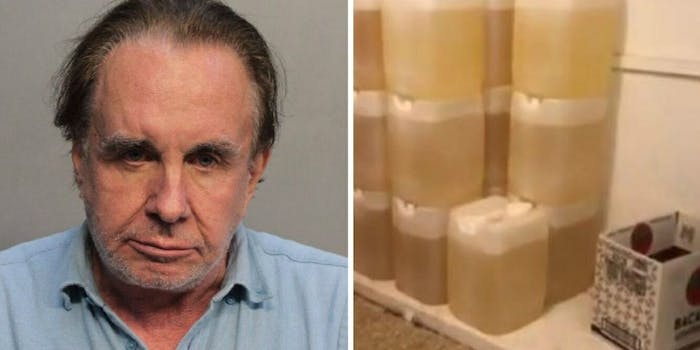 A Miami man was arrested late last week and charged with attempted murder and first-degree attempted arson after he allegedly told a witness he planned to burn down his condo building “with all the fucking Jews” inside, according to police.

The Miami Herald reported that 72-year-old Walter Stolper was upset that he was going to be evicted from his Miami Beach condo. Police said they found Stolper in the parking lot on Thursday moving two plastic containers in a shopping cart that smelled like gasoline. Police searched his home and allegedly found eight containers, the same kind they found in his possession in the parking lot, filled with gas.

In the apartment, which contained Nazi books and swastikas, police said they found two electrical fans, which he allegedly was going to use to “fan” the flames. Stolper allegedly told detectives that he had bought the gas “to make a small barbecue.”

“We are confident the work of our detectives prevented an imminent crisis at 5601 Collins Ave.,” police said, via the Herald, on Friday morning.

Here’s a video taken from inside Stolper’s storage unit at the condo complex, where police allegedly found more than two dozen more gas containers along with sulfur powder and potassium nitrate.

UPDATE: Detectives have located a storage room linked to the defendant. The room located within the same building contained 28 additional containers with gasoline, sulfur powder, and potassium nitrate. He has now been charged the with Attempted Murder. pic.twitter.com/9cXvNkWwiU

Police said that Stolper told a witness named Luis Diaz that he was “going to burn down the building with all the fucking Jews.” Aside from pouring gasoline down the garbage chute from the 15th floor, Stolper also allegedly planned to install locks on the fire hoses inside the condo to thwart the fire department’s efforts. Police said Stolper also destroyed the smoke detector in his condo.

“He told me he was tired of the association and the Jews in the building and he wanted to do something about it,” Diaz told CBS Miami. “He said he wanted to burn down the building. At first, I didn’t think he was serious but then I heard him talk about blocking the fire department and their hoses I realized he was serious and I had to do something … I think he needs help. He is a confused older man. I have been his friend for 10 years and I know him because I am a camera technician and have done work for him. At first, I thought he was just angry and venting but I realized it was much more.”

Said Sheri Zvi, a Florida regional director for the Anti-Defamation League, in a statement: “We commend the Miami Beach Police Department, led by Chief Daniel J. Oates, and the Federal Bureau of Investigation for taking this tip seriously, and for the swift investigation which undoubtedly thwarted a potential mass-casualty event. … Based on available public information about the incident, we urge the Miami-Dade State Attorney’s Office to take a hard look at reclassifying and prosecuting this incident as a hate crime.”