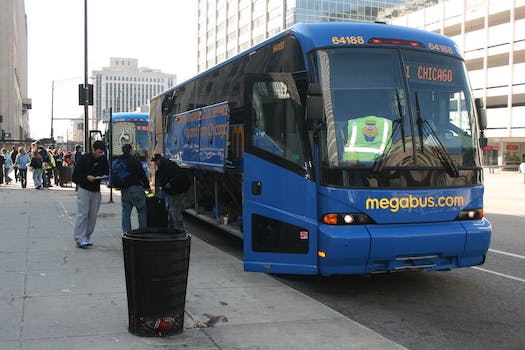 Passengers livetweet the terrifying explosion of their Megabus

None of the passengers were injured.

A Megabus traveling from Chicago to Minneapolis exploded shortly after departure as some of its 40 passengers—watching from the side of the road—livetweeted the harrowing experience.

The Megabus left Chicago around 12pm CT, but it turned around approximately an hour later to “switch buses,” according to New York Times reporter Lucas Peterson, who writes the Frugal Traveler column. Just five minutes after the bus started heading back, a tire blew, forcing the bus to pull over on the side of Route 41. Despite the driver’s insistence that it was just a flat tire, the bus started to smoke.

Driver says it's just a flat tire, that there's no need to panic, and goes outside. Minutes later smoke starts pouring out of the bus.

Update: the bus is on fire. pic.twitter.com/alvXtoHbwL

Peterson and the other passengers got off the bus just fine and tried to save their luggage while the fire was still small. But they soon abandoned attempts to rescue their luggage when the fire on the bus started to grow, and a series of explosions began.

Small fire over wheel becomes big; people abandon luggage and get away. Entire thing goes up in flames, series of loud booms.

What's left of the bus. pic.twitter.com/9nCdhHINLf

Another passenger captured video of the fire coming from the Megabus.

I always vow to never take the #megabus again but this time I think I'll stick to it pic.twitter.com/ynlHFx1ivY

By the time that the Lake Forest Fire Department arrived on the scene, the bus was completely engulfed in flames. Authorities are still investigating what caused the bus to explode.

“Megabus.com can confirm that one of our vehicles travelling from Chicago, IL heading towards Minneapolis, MN was involved in an incident today near Waukegan, IL,” a Megabus spokesperson said in a statement. “Safety is our top priority and Megabus.com is fully cooperating with the authorities with their investigation into the incident.”

None of the passengers were injured, but most of their luggage was burned and destroyed. After talking to some of the other passengers, Peterson discovered that some of them had lost clothes, textbooks, thousands of dollars worth of belongings, and one person had lost nearly everything he owned.

Darnell McKinney says he was moving STL to MIL and lost most of his possessions, SS & credit cards, birth certif. pic.twitter.com/voWcn1UYVQ

But their troubles are far from over. Once they got on the replacement bus, some of them discovered Megabus’s Terms of Service and they likely won’t be compensated for most of their possessions that were lost in the fire.

passengers are looking up Megabus TOC which limits liability to $250; some very unhappy people. pic.twitter.com/8p5QDVIgS5

Photo via Jeramey Jannene/Flickr (CC BY 2.0)