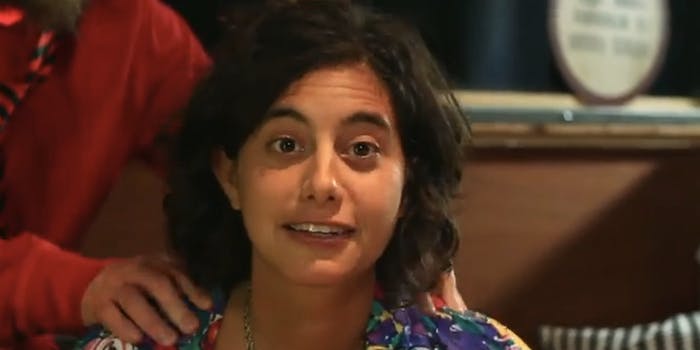 ‘Meet My Rapist’: Filmmaker turns her rape into YouTube satire

Jessie Kahnweiler confronts her rapist in her latest YouTube video.

Filmmaker Jessie Kahnweiler, a YouTuber whose explored her Jewish heritage in a webseries called “Dude, Where’s My Chutzpah?,” has released a short film satirizing her experience with rape.

The video is called “Meet My Rapist” and shows Kahnweiler, 27, strolling around a flea market until she comes across a man in a red jacket who looks familiar. Turns out it’s her rapist, who’s been popping up at inopportune moments for a long while. In real life, Kahnweiler was raped when she was studying abroad in college, according to the Jewish Daily Forward, and the film was cathartic for her to make.

The rapist is in the background everywhere, haunting her at job interviews, at dinner with her parents, and outside on a sunny day. No matter what she does, she just can’t shake him. In an interview with the Forward, Kahnweiler said she wasn’t trying to make a “comedy about rape” but rather to satirize what she went through and to show how prominent the terrible night became in her everyday life. The whole interview with Kahnweiler is an excellent read.

The video has been met with a mixed response: Some are unsure what to make of it because of the uncomfortable subject matter, others find it refreshing and revelatory. In the video, Kahnweiler tells her rapist, “I know why you did it. I’m adorable,” and during a job interview she assures her potential boss that she won’t be an “angry woman” even though she was raped. She’ll be sure to make certain others are comfortable. It’s spot on, sad, and perfectly encapsulated.