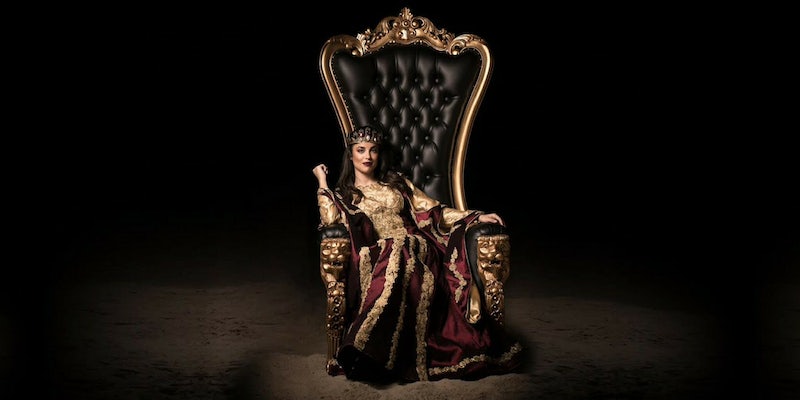 Medieval Times is now more modern than our own country!

Finally, a dinner and show fit for a queen.

Across all nine of its U.S. and Canada locations, Medieval Times, the family dinner theater company, has launched a new show, bringing audiences someone they’ve never seen before in its 35-year reign: a female lead. Or, more specifically, a queen.

According to the Chicago Tribune, Leigh Cordner, the show’s director and writer, spent 18 months rewriting the show’s script to feature a queen in the lead role. The new Chicago show, specifically, launched the week of Dec. 7, while the show first launched at the company’s Dallas location in October.

In this iteration of the show, featuring a medieval-style play of knights jousting and horseback-riding while audiences are served dinner by “serfs” and “wenches,” Queen Doña Maria Isabella reigns supreme. Audiences learn that she has taken over as queen after her father died and that she will take absolutely no sass from those around her. Monet Lerner, one of the actors who plays Isabella in Dallas, characterizes the queen as kind, but won’t let anyone put her down just because she’s a woman.

“There’s a couple of times when the men of the realm get a little feisty, and she has to come in and be like, ‘You know what? The choice isn’t yours, it’s mine—because I have the blood of kings in my blood,'” Lerner told D Magazine.

“It’s definitely a message of heart and confidence. In this new role, the queen has come forth to finally take her place on the throne and in doing so, she can also serve as a role model for women and girls of all ages,” Sara Schubring, one of the four actors sharing the role of queen at the Chicago location, told the Daily Herald.

Cordner, who has performed each of the male roles throughout his time with the production, told the Tribune that he wanted to diverge from a plot where women have to marry men for validation and agency.

And while the show is inherently political in an era where women are reclaiming their agency—both socially with the #MeToo movement against sexual assault and politically with 2018 statewide elections looming—Cordner said he wasn’t inspired by this climate for change. More simply, he was inspired by feedback he’s been hearing from audiences for years.

“It’s always important to give little girls a positive role model,” Allyssa O’Donnell, one of the other actors playing the queen in Chicago’s production, told the Tribune.  “It is so important to give them a strong woman to look up to.”