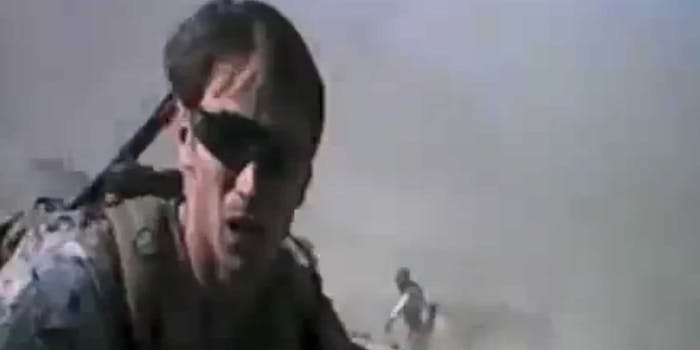 Here’s how a heroic soldier earned his Medal of Honor

One fateful dawn in September 2009, military advisers Captain William D. Swenson and Sgt. First Class Kenneth Westbrook, along with a contingent of Afghan National Security Forces, walked into a deadly ambush by Taliban forces at Ganjgal, a mountain village near the Afghanistan-Pakistan border where they had expected a friendly reception. Now, four years later (and two years after Marine Sgt. Dakota Meyer received the same prize for heroics in the same battle), Swenson has been awarded the Medal of Honor for his grace under fire.

It would be unusual enough for a living soldier to receive the Medal of Honor—Swenson is only the fifth since the Vietnam War—but as President Obama stated in an official ceremony yesterday, “this may be the first time that we can actually bear witness to a small part” of those valiant actions that were worthy of such an accolade.

That’s because the U.S. Army released footage from two helicopters dispatched to the area for the medical evacuations Swenson facilitated while repeatedly braving a kill zone of machine gun and grenade fire.

Particularly in the second part of the YouTube clip, which shows the same two minutes and 20 seconds from the perspectives of both Black Hawk Medevacs, we catch a powerful glance at Swenson charging back into the fray and bringing his colleague Westbrook, who had lain in the open with a chest wound, to safety. He then kisses him on the forehead and leaves the rejoin the fight, which would rage for hours yet. Westbrook passed away a month later on U.S. soil, able to share a proper goodbye with his wife Charlene Westbrook, through whom the video was made available.

Swenson was ultimately able to save a few more wounded and retrieve several bodies of those killed in the onslaught, American and Afghan alike. His heroism—on his third tour of duty, no less, following previous deployments in both Iraq and Afghanistan—came under impossible circumstances: an investigation into the incident ended with reprimands for Army officers who initially denied Swenson’s request for fire support because they feared civilian losses, which resulted in further military casualties.

Swenson left the Army in 2011, entering a period of unemployment that he referred to as a “forced retirement,” but the Associated Press confirmed with two U.S. officials that he has submitted a formal request to return to active duty, possibly at the rank of major. Having already received the highest recognition his field has to offer, it seems his sense of duty is stronger than ever.