The Internet is wrong: Taking MDMA won’t cure your depression

The media is clamoring about a study that claims that MDMA might cure depression. But how valid is that study, really?

This article is an opinion piece that does not necessarily reflect the views of the Daily Dot.

Everyone loves doing drugs. If you say you don’t love doing drugs, you haven’t done drugs, or you’re lying because your chosen occupation precludes you from saying it aloud. However, we all know in our heart of hearts that drugs are fantastic. Without cocaine, my mother never would’ve had unprotected sex with a frat guy she barely knew in February 1986, and I wouldn’t be writing this article today.

It’s a common belief that drugs can actually improve our performance in certain fields. All your favorite albums from the ‘60s and into the ‘70s were steeped in hallucinogens. Former Pittsburgh Pirates pitcher Dock Ellis famously threw a no-hitter on LSD. And even President Obama was known for cruising Hawaii in the “Choomwagon,” blowing trees with his “Choom Gang.”

But recently, a small number of studies have surfaced indicating that there might actually be legitimate medical uses for MDMA. Essentially, one of these studies demonstrated that MDMA (also known as Molly) could potentially be used to treat people with social anxiety and autism. These studies haven’t been conclusive one way or another, because medical research takes a long time and requires many clinical trials to prove any hypothesis. But having researched drugs (particularly MDMA) for some time now, I can tell you right off the bat that those studies are probably bullshit.

Two years ago, I covered the black market economics of Molly, née MDMA. I learned about what happens when you ineffectively legislate a controlled substance, remove all social protections, and allow misinformation to flourish. This perfect storm was responsible for 36 people falling ill and being hospitalized at an Avicii show in 2014. I still maintain that it’s a matter of time before a “hot shot” takes out half a festival like in that season 2 episode of The Wire.

It’s true that a variety of psychoactive drugs have been used on PTSD, anxiety, and addition patients for decades. If you’d like to dive into a great story on how these studies work, check out “Bliss” from a few years back on Radiolab. Some studies have found that psilocybin mushrooms may (or may not) have some value as medicine, but the studies haven’t shown anything conclusive enough for any pharmaceutical company to pursue. MDMA was also used decades ago as a “marital aid,” which I totally understand. This one time at band camp, I did Molly, and I had sex… and I can tell you that sex on Molly is fucking awesome.The Internet has played a large role in spreading the idea that MDMA can have salutary health effects. Even the authors of the studies themselves are encouraging this notion. A few months ago, two Norwegian doctors who authored a study about MDMA in and mental health, Teri Krebs and Pål-Ørjan Johansen, even took over a Reddit Science AMA to talk about their trials—and it devolved rather quickly. Far be it from me to call doctors I have never met irresponsible, but when you ask a doctor to tell you if it’s safe to take MDMA, and the doctor tells you to “look on the Internet,” that’s generally a pretty bad sign.

When you ask a doctor to tell you if it’s safe to take MDMA, and the doctor tells you to “look on the Internet,” that’s generally a pretty bad sign.

But what do we really know about MDMA and its medical applications? Well, we know that MDMA could, possibly, work in conjunction with traditional SSRIs to help treat depression. The reason? Molly increases your oxytocin levels, which makes you friendlier—and if you’re suffering from anxiety, not fearing other humans could be a good thing.

Do we know for sure that this will work? Hell, no. But that hasn’t stopped the media from spreading a fragment of information as gospel. Vice News, Yahoo, and the Daily Beast all published enthusiastic articles touting the mental health benefits of MDMA, despite the fact that it was way too early in the study to say that MDMA had any effect on depression at all. After all, a listicle for the “Top 7 Medical Uses for MDMA” sells a lot more ad space than “Early Clinical Trials Regarding MDMA Are Inconclusive.”

Studies have also shown that people suffering from PTSD might help alleviate their symptoms by consuming MDMA. But we really don’t know, because the sample size for one of these studies was literally one dozen people. Our generation fought two irresponsible wars, and there are plenty of PTSD sufferers wandering around. What better time to dose a veteran with a bunch of stomped-on Molly to “help them out”? Enjoy the ride, solider. Hope your heart doesn’t stop.

Another study in South Carolina also attempted to find out if MDMA could alleviate symptoms of anxiety disorders. That study had 20 patients, and the conclusion was also something along the lines of, “Well, maybe?” That’s because clinical trials can either go up, down, or sideways. “Maybe” is the sideways direction, meaning, “It’s neither showing enough positive or negative results to make a judgement.”

There is a possibility that MDMA can be used to treat anxiety in people with autism. In a controlled, medical setting, the effects have been mostly positive. But I don’t think you need to be a genius to differentiate the difference between a legitimate medical need (social anxiety caused by ASD), and a college girl looking to enjoy the finer points of ULTRA in Miami.

Yet despite mountains of overwhelming, irrefutable evidence that we simply don’t have enough evidence to say whether MDMA is good for you, forums on Molly/MDMA are populated with people who insist on saying otherwise. These people are not doctors, and have no medical training whatsoever. They have a penchant for making shit up. They need to confirm it’s okay to consume Molly, because they totally do it at Burning Man, and as long as you drink enough water, it’s totally cool, man.

People on Internet forums (including people who have actually taken MDMA in clinical trials) want to regale you with anecdotal evidence about MDMA being good for you, so they cherry-pick PDFs they read perhaps one quarter of. Even if you were someone who participated in a clinical trial, this does not mean your experiences are any indicator of overall efficacy. That’s why clinical trials are conducted in large numbers. Of course, we can count on the neckbeards of Reddit to toss in their conjectures, because they took high school biology classes, and are quite skilled in the art of copypasta.

Reddit even has its own group dedicated to MDMA therapy. Many of these threads are filled to a surfeit with young people waxing poetic about their anecdotal experiences. “‘Well dude, none of those people in the clinical trials died, and everyone is cured of PTSD when they take it… so that shows you that Molly isn’t deadly.’”

The reason why we do clinical trials in a controlled setting, with doctors present, is because everyone reacts differently to different drugs. If something goes poorly, there’s a wide range of medical options available to bring you back to life. The doctors know exactly what you took, how much, and when. These things are all important to know when dealing with someone having an adverse reaction to any substance.

In summation, don’t listen to morons on forums. If you want to do drugs and take enough Molly to kill small livestock, that’s your decision, but make that decision an informed one. Molly is not safe because it’s been in limited clinical trials with PTSD patients. It’s not safe because a dozen people used it in conjunction with other SSRIs to treat anxiety. It’s not safe, because hundreds of doctors over several decades have concluded that MDMA is not safe.

It can cause your heart and kidneys to fail. It might make you vomit black bile, and you’ll be left asking someone on a forum why your bile ducts are literally bleeding.

It doesn’t matter what someone in a clinical trial did when they were trying to get off SSRI’s. You shouldn’t stop taking any medication without consulting your doctor first. Yet people on the internet actually think it’s OK to get permission from other anonymous idiots on a Molly forum to quit taking their Lexapro and start taking street drugs. 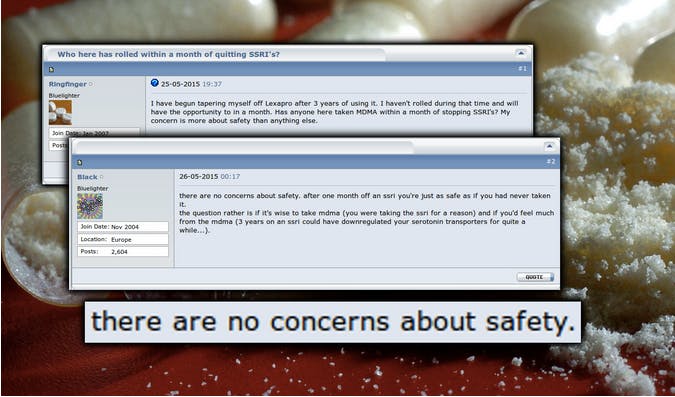 This summer, as festival season approaches, you’ll want to take Molly —nd you may do it, despite knowing it could kill you. You may be inspired to visit such trustworthy and medically accredited websites like Shroomery.org, and ask people who like taking mushrooms whether or not it’s safe for you to take drugs. But make your decision to take drugs an informed one. A few small PTSD and anxiety treatments being touted by idiots on mushroom forums does not change decades of science. Fucking on Molly is the most amazing thing in the world, but there’s a slight chance fucking on Molly will be your last act as a human being.

Update 9:15am, June 21, 2018: A new study published last month has given people with PTSD renewed hope for MDMA as a viable treatment option. According to the New York Times, “Nearly all patients saw clinically significant reductions in symptoms, and a majority saw such drastic reductions that they no longer met the criteria for a PTSD diagnosis.” The phase 2 study, while FDA approved, only included 26 participants, all veterans of police, firefighting, or military service. Phase 3 studies, including a couple hundred participants, are slated to begin this summer.