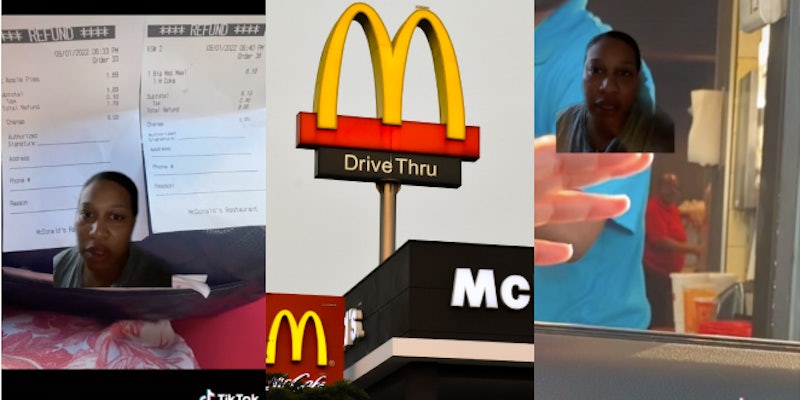 ‘It’s about the principle of the matter’: Woman says McDonald’s employee would not refund her 73 cents after messing up order

'Not her expecting you to leave without getting all of what you gave them.'

A woman on TikTok is calling out McDonald’s for refusing to properly refund two apple pies that she ordered but didn’t receive.

The woman, known as Tea C West on TikTok (@teacwest), recently posted a video detailing what she describes as the “most irritating experience at McDonald’s.” As of Wednesday, the video garnered about 654,000 views on TikTok since being posted on Sept. 2.

“When I say I’m going to report the hell out of this manager, y’all,” West says in the video.

She explains that she ordered a Big Mac and two apple pies through a McDonald’s drive-thru. The order totaled $11.20. But when West got to the second drive-thru window to collect her order after she paid, an employee told her they didn’t have the two apple pies she paid for. She asked West if there was anything she wanted instead, but West told her “no, thanks.”

West says the employee seemed “panicked” and told her manager about the situation. She says the manager said she didn’t know what else to give West.

“And I’m like ‘well, you can give me my money back,'” West says, recounting what she told the manager.

After West waited at the window for five minutes, the manager came back and handed West a refund receipt and money. Then, the manager walked off without an apology or any further comment, West says.

West counted her refund, which only totaled $1.79. She says she was charged $2.38 for two apple pies though, and she wanted the full refund for those pies.

West says that when she called out the manager for the incorrect refund, the manager told her she didn’t care and that she gave her the proper refund. West told her to override it and give her the full refund for the pies.

“She’s like ‘I can’t do that.’ I said, ‘well you have to do something because I’m not pulling off until you give me all of my money for the refund,'” West says in the video.

The TikToker says the McDonald’s manager got “rowdy” at that point and clapped her hands together, saying she already gave West what she gave her. The manager told West she’d have to come back tomorrow if she had a problem with the refund. West says she refused to leave until she got her money back.

“You’re not gonna take my money and just think it’s cool,” she says.

When other employees noticed West was holding up the drive-thru line, “some random employee” intervened, saying they’d give her the refund. That employee gave her back $8.68, which still didn’t total the $11.20 she was charged. It seems at that point that West wanted a refund for the entire order, not just the two apple pies.

Another employee asked West to move her car out of the line, but West refused to do so until she got her full refund. At that point, the manager came back and asked for West’s receipt. Then she told West to give her the food back, too, which she did. But as West was handing it back to the manager, it fell on the ground. The manager told West then that she had to come back tomorrow for a refund, but West refused because the manager had her receipt still.

West’s story sparked a debate among viewers, with some telling West that she was wrong to hold up the line over such a small amount of money.

“All of that for $0.73 cents,” one viewer commented disapprovingly.

“I’m on the manager side on this one,” a second viewer commented.

A third wrote, “I don’t get it why did she refund you the 8.00 when you only wanted the money back for your apple pies something not adding up in this story.”

“Honestly this was not worth all the trouble literally fighting over not even a dollar,” a fourth said.

However, some viewers said the issue wasn’t about the money, it was about the principle. Several viewers defended West for standing up to the manager.

“it ain’t about the amount it’s about the principal,” one user said.

“I don’t understand why ppl are acting like you’re in the wrong, McDonald’s wouldve demanded their 73 cents for that food, so get all yours sis!” another user said. In reply to that comment, West wrote, “I would’ve let $ 2.00 slide, but not after the way she disrespected me. at that point, it was the principle. dont yell at me becuz u cant use a register.”

“Not her expecting you to leave without getting all of what you gave them,” one user said about the manager.

“Everyone saying “all of that for a dollar” ask yourself how McD would act if you tried to short them $1,” someone else wrote.

The Daily Dot reached out to McDonald’s via email and to the creator via TikTok comment.