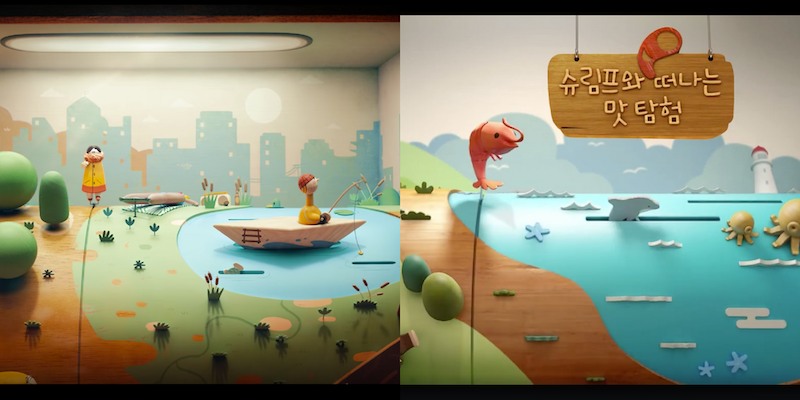 McDonald’s is accused of plagiarizing work in South Korean ad

The team behind McDonald’s advertising may need to go back to the drawing board.

The artists who created a music video for Israeli band Jane Bordeaux have accused McDonald’s of plagiarizing their work in a commercial for the company’s South Korean market.

The premise of the video for “Ma’agalim,” which the producing team from Tel Aviv released last April, shows a wooden doll gliding along the surface of a mechanical rotating cylinder scene in a penny arcade. The animated commercial, which advertises two shrimp-incorporated burgers that were introduced to the menu in October, shows a shrimp doing the same within an artistically comparable scene.

Similar scenes from the music video at 0:30 and 2:10 above can be seen in the commercial below.

On Sunday, Yoav Shtibelman, a producer on the project, published his allegation to Facebook, writing that someone had recently sent him the link to the commercial.

“[I] was shocked to find they copied our work in the most obvious way. Sadly, we don’t have the manpower or the money to take legal actions against a huge corporation like McDonald’s. But I do want to use this platform and express my thoughts with you,” Shtibelman wrote. “[Copying] our artwork to make a profit is not OK! This is wrong and we all need to raise public’s awareness to this issue.”

Uri Lotan, a producer and director for the music video, referred the Daily Dot back to Shtibelman’s Facebook statement, but also provided a side-by-side comparison of the two works. (McDonald’s did not immediately reply to a request for comment.)

Many online point out that the videos are obviously similar, from the placement of the shrimp, the lake, and the rest of the scenery, to the animation style and details, like the shapes of the shrubs, and the painted background on the “box” encompassing the rotating display.

This is the second plagiarism allegation against McDonald’s in the past year. In August, cult animator Cyriak Harris, whose work has been commissioned by groups spanning band Bloc Party and Coca-Cola, accused the company of copying his video Cows & Cows & Cows.

Back then, the commercial had advertised the company’s use of milk for ice cream in its South America market. In this instance, McDonald’s told the Independent they were investigating the allegations made against the advertising agency behind the commercial.

Wonder how much @McDonalds paid someone to copy my video. I didn't even get paid to make the original pic.twitter.com/XGWjHQq0j6

In 2015, McDonald’s was also accused of refusing to pay bands for its South by Southwest conference pop-up, with indie band Ex Cops blasting the corporation online for its insistence that the band be compensated in “exposure,” an argument obsessively carted by people or groups unwilling to pay people in with arts industry with actual money for their work.

“I think [Shtibelman’s post] sums up everything we’re thinking about the situation,” Lotan told the Daily Dot via email. “And yes, I’ve seen the commercial and think it’s a misfortune to see such behavior by a well-known [corporation] such as McDonald’s.”