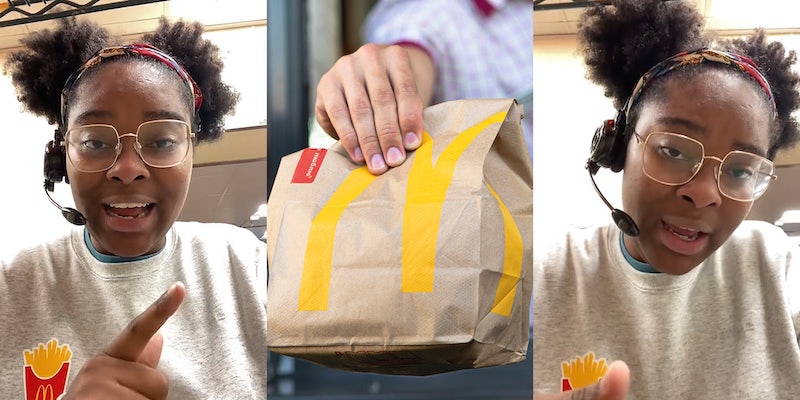 ‘Y’all got little Damion sitting over here spending his birthday money on a f*cking happy meal’: McDonald’s employee calls out parents who make their kids pay for their food

'Why are you teaching a child, that has no means of making money, how money works?'

In a viral video posted Sunday, TikToker Mikeyy Sulli (@sulliville1) shared one of the craziest things they’ve witnessed as an employee at McDonald’s: parents making their children pay for their happy meal.

“I’m telling y’all, in like…realistically…in the next 15, 20, maybe even 25 years, I’m gonna need a study done by the government asking people why they decided to put their parents in a home,” they say in the clip. “I’m telling you, a lot more of y’all is ending up in a home behind a happy meal than y’all think.”

“Y’all got little Damion sitting over here spending his birthday money on a f*cking happy meal that was $4,” they conclude. “Bitch he’s gonna put your ass in a home where they burn you with cigarettes.”

In the comments, most viewers were unaware that this is something Sulli commonly witnessed.

“Wow that’s just SO unreal like wow,” one user commented.

However, some offered reasoning as to why they would make their kids pay for their own meals.

“My kid is buying her own meal. You don’t want to eat what I cook, fine. I’ll take you just pay. She learned how money work,” one user suggested.

In response to that TikToker’s comment, Sulli made another video explaining their stance on children paying for their own food.

“Why are you teaching a child, that has no means of making money, how money works?” they ask in the clip.

Sulli explains that the kids have no way of making the money back, while their parents likely have a job. They also note that the children did not ask to be brought into this world—that’s the parent’s responsibility.

“There are so many more ways to teach your child the value of money and how it works that does not require them to care for themselves at young ages,” they say.

The majority of users in the comment section agreed, arguing that it’s unfair to charge one’s child for just being here.

The Daily Dot reached out to Sulli via TikTok comment.