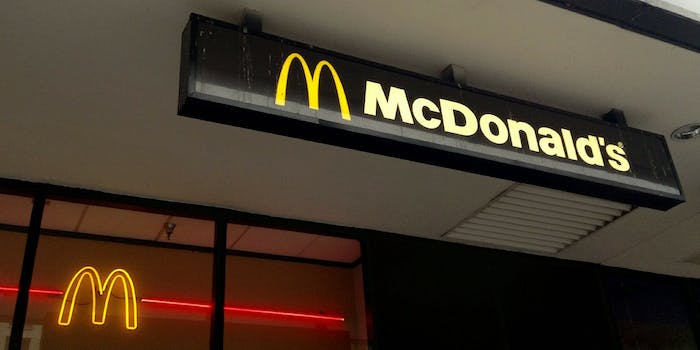 She did not back down.

One British Muslim woman has gone viral after recording a video of McDonald’s workers telling her they wouldn’t serve her unless she removed her hijab, a religious headscarf that some Muslim women choose to wear for their faith.

On Thursday, friends of the 19-year-old U.K. woman, who has chosen to remain anonymous, shared several tweets and one video detailing the incident. The two other friends, who go by Sabrina and Amaani, said their hijabi friend was refused service at a McDonald’s in Holloway, London.

After being told they wouldn’t serve her, the teen wearing the hijab began recording the staff on her phone. The 74-second video shows the teen asking staff to tell her why she can’t get in line to order.

“Why can’t I come into McDonald’s? Because I’m wearing a hijab? I’m sorry, but like, can you please say it?” she asks a man who appears to be a security guard.

“What? It’s just a matter of taking it off. Then you can…” he responds before she cuts him off.

“It’s not just a matter of taking it off. I wear this for religious reasons and I’m not ashamed of it, and I will stand in line and I will get the food that I want because this isn’t OK,” the teen responds. “I go to all the shops and any restaurant I want, and in my hijab … and then I come here, and I literally live down this street from here. This is actual like, a hate crime. This is a hate crime.”

Another patron, an older white man standing behind the staff member, tells the guard he cannot stop her from ordering food while wearing her hijab, to which the guard says it’s none of the man’s business.

The teen then goes to the counter and asks to know who has implemented the policy requiring her to remove the headscarf, and she uses the phrase “fucking ridiculous,” to which a staff member behind the register tells her to not be rude. The worker then asked her to stop recording, and when she doesn’t, he offers to serve her.

“I don’t want anything anymore, I’m pretty full to the head right now,” she responds, turning toward what appears to be the ramp for an exit before the video ends. The video has since received thousands of likes and retweets on Twitter.

In her tweets, the friend named Sabrina said they would be contacting appropriate authorities to make sure the incident would be dealt with.

The second friend, Amaani, tweeted at McDonalds U.K. and asked it to take care of the matter.

Speaking to the Guardian, the teen wearing the hijab said the security guard had asked her multiple times to remove the article before she began filming.

“I thought: ‘It’s finally happening to me,’ like it has to so many hijabis. It didn’t feel real because I had seen so many videos like this and it was finally happening to me in real life. I was in so much disbelief,” the teen said. “The friend I was with was shocked and scared, and said it was a risky situation. When it was over, I finally realized how these situations can become dangerous. This is not a one-off thing.”

In a statement, a McDonald’s spokesperson said the fast food chain doesn’t have a policy that restricts people wearing hijab or other religious clothing from entering.

“We welcome customers of all faiths and would like to apologize to the customer as this situation should not have taken place,” the statement read. “We are taking this matter extremely seriously and are addressing this with the individuals involved.”

For the teen, however, the damage has already been done.

“I will never walk into a McDonald’s again,” she said.