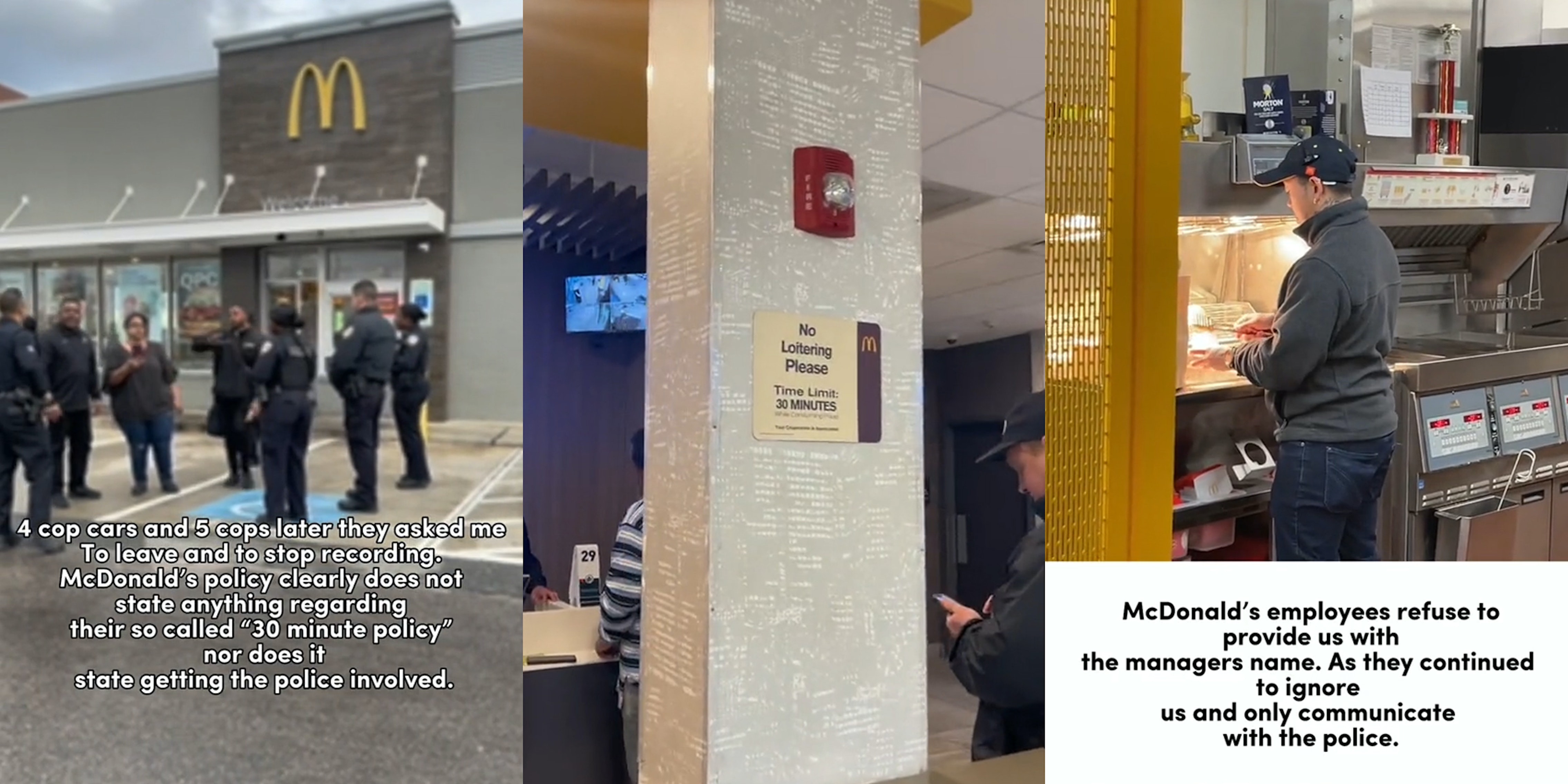 ‘The place is empty so why does it matter to them?’: Customer says McDonald’s kicked him out of store 30 minutes after he purchased food

A McDonald’s customer is calling out one of the fast-food locations online after he was told he couldn’t stay in the store for longer than 30 minutes.

TikToker Jensen Harris (@jensenaharris) went viral on the popular video-sharing platform after posting a clip of him getting into a verbal altercation with the McDonald’s staff at a Providence, Rhode Island location. In the video, Jensen demands to know why the store has a 30-minute policy for guests that state they must leave the premises after a certain amount of time, even if they are paying customers.

Jensen claims that the chain has no such policy in place and believes he was racially discriminated against by the McDonald’s employees.

@jensenaharris McDonald’s in Providence Rhode Island employee calls 5+ cops on a paying customer. This McDonald’s is a franchise. Some will say they can make whatever rules they want. Yes, they can. But when those rules/ polices are selectively enforced to certain paying customers that is a different situation. This “30 min eating policy “ is on the wall for all paying customers not certain ones on certain days. #discrimination #mcdonalds #police #justice #policy #blm ♬ original sound – Jensen Harris

Jensen says in the clip as he records employees, “I’m here in McDonald’s in Providence, Rhode Island. I’m told I cannot sit here for more than 30 minutes after I eat. I’ve never seen this. This is very misleading. I guess we’re gonna see what’s gonna really happen.”

At this point in the video an employee can be seen talking to Jensen, it sounds like she says, “What does that have to do?”

He responds, “What it has to do with why would someone come inside, already buy food, get food.”

Jensen and the employee then begin to argue about store policy, and the TikToker cannot believe that the fast food chain would actually implement a rule like this in their stores.

“That’s not the policy of McDonald’s,” he states as the video then cuts to screen-shared footage of a smartphone web page on the McDonald’s website, scouring for any mention of a time limit that dine-in guests have at a location. He then posts a series of text overlays, paired with a voice filter that states the restaurant doesn’t make it clear whether or not there is a 30-minute dine-in policy or if there ever was one to begin with.

The video then cuts back to another employee approaching Jensen from behind the counter. She points to the camera and tells him that he needs to delete the video. He responds that he won’t. “I’m not deleting that…don’t make me have to call up anybody for that,” he says. “That’s not right. That’s not right.”

The McDonald’s employee is on the phone with someone as Jensen continues to record. After she begins speaking into the receiver, it becomes evident that the call is about Jensen’s behavior inside of the restaurant.

He then turns the camera around, “I’m at McDonald’s right now, I already paid for my meal now they’re telling me I have to leave the McDonald’s because I’ve been here for more than 30 minutes. I’ve never seen this…”

He continues to walk around and film the interior of the restaurant. “I don’t think they should be doing this,” he says before pointing out the manager and zooming in on them with his smartphone camera. “All I’m doing is waiting, charging my phone, I’m waiting on people because I have people that actually I’m meeting for family—let’s see what happens today. Let’s see what happens. Let’s see what type of incident we get—let’s see what lawsuit we have, and I will call my attorney.”

The video then cuts to a clip of McDonald’s employees ignoring Jensen. In the text overlay, the TikToker claims that the workers refuse to provide him with the name of their manager.

Jensen then films various police officers standing outside the McDonald’s location. “4 cop cars and 5 cops later they asked me to leave and to stop recording,” he wrote in the text overlay. “McDonald’s policy clearly does not state anything regarding their so called ’30 minute policy’ nor does it state getting the police involved.”

The Daily Dot has reached out to the McDonald’s location via phone and Jensen via TikTok comment for further information.

Jensen’s video has received over 455,000 views on the platform as of Wednesday.

One viewer shared their incredulity at the “30-minute policy” at the specific location in the comments. “So they set a timer EVERYTIME someone sits down to eat,” they said.

Another user on the platform thought it was strange that a relatively empty store would have such stringent timing policies for patrons: “The place is empty so what does it matter to them how long he is sitting there.”

Jensen responded to another TikToker in the comments who remarked that the policy appears to be “selectively enforced.” He wrote, “Exactly!! You are woke! Everyone else is commenting about oh it’s their policy and privately owned… if it’s a policy, why do they only use it sometimes?”

According to Legal Match, the right to refuse service or asking customers to leave the premises of their establishment can be a grey area, though there are a few exceptions under certain state laws. “The Civil Rights Act of 1964 explicitly prohibits restaurants from refusing service to patrons based on race, color, religion, or national origin,” the site states. “In other words, restaurants do not have a constitutional right to refuse service.”

Update: 9:32am CT, Jan. 13, 2023: In a message to the Daily Dot, McDonald’s shared a statement on behalf of Chris Walach, the McDonald’s location’s owner/proprietor:

“We have a zero-tolerance policy against discrimination in our restaurant. Based on our review of the surveillance video, this customer was in our restaurant for well over an hour. Staff approached him and reminded him of our 30-minute time limit policy after he laid down and fell asleep in a booth.”