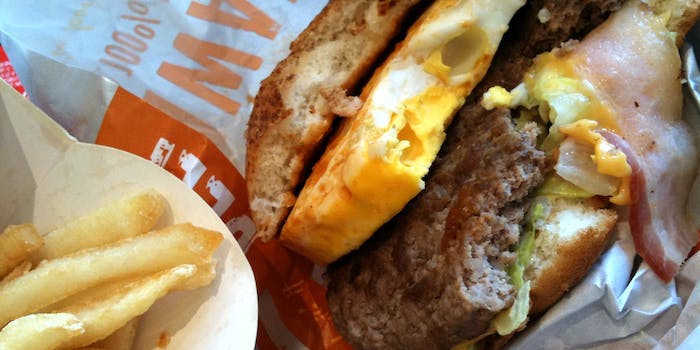 On Monday, McDonald’s announced that it would be testing out an all-day breakfast menu. It’s a shrewd business move on McDonald’s part, considering that breakfast accounted for about a third of the fast food chain’s sales in 2012.

At first, I was pretty excited by the announcement. After all, the Egg McMuffin is one of the greatest inventions known to man, and an all-day breakfast would create the opportunity to #drunkbrunch with a McMuffin and a flask. But then, I read this man’s bold idea.

Now, breakfast all day is the most exciting thing that’s ever happened to me.

I pretty much only go to McDonald’s if I’m on a road trip, or if I’m at an airport. I usually order sausage McMuffins if it’s still breakfast time, or large fries and maybe some chicken tenders if it’s the afternoon. But imagine a world in which I didn’t have to choose. Imagine a world in which I could eat breakfast and lunch and dinner all at the same time under those spectacular Golden Arches. Just think of all the amazing combinations I could come up with.

McDonald’s will be testing the option in San Diego next month and is considering rolling it out to other markets if it’s successful. Judging by the positive reception the chain has gotten so far, it seems that’s pretty likely: