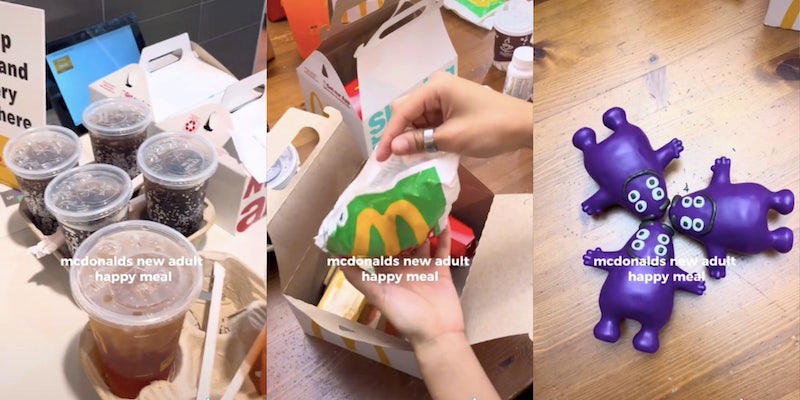 ‘It’s official, none of us wanted to grow up’: Customer shares first look at McDonald’s new Happy Meals for adults

'Remember u are never too old for a happy meal.'

McDonald’s has unveiled its new adult happy meal, and the menu item has become a craze on TikTok.

One McDonald’s customer, a TikToker named Madz (@lifeby.madz), shared a now-viral video showing the happy meal, which was released Monday. As of Monday, the video garnered about 3.5 million views.

The meal has been dubbed “the adult happy meal,” possibly because of a tweet from McDonald’s before they announced the menu item. On Sept. 23, McDonald’s tweeted, “remember u are never too old for a happy meal.”

Madz says she was able to enjoy the new happy meal before it was officially released.

“Comes out 10/3 but the employees gave it to us early bc we asked nicely,” Madz wrote in her video’s caption.

Viewers had mixed reactions to the video. Some gushed about the “adult option” while others questioned the meal’s packaging.

“Ok. It’s official, none of us wanted to grow up. Bc I literally cannot wait to try this!” one viewer commented on the video.

Some users said they wish the meal came in a pumpkin-themed box.

“I just want the Halloween buckets,” one user said.

“WHY ISNT IT IN A PUMPKIN BUCKET,” another user wrote.

Others said they weren’t familiar with Cactus Plant Flea Market and speculated that no one will recognize the toys that come with the meal. Cactus Plant Flea Market is a fashion label crafting original streetwear with signature dye treatments and lettering, according to a page on the McDonald’s website explaining their collaboration with the company. Some pieces are hand-embroidered, and a select few feature the character of Cactus Buddy, included in the set of four coveted collectibles.

“Nothing like kids who have no idea who these characters actually are,” one user commented on the TikTok.

“[Their] reasoning for these were nostalgia but most people have no idea who Cactus Plant Flea Market are. I’ll wait til 10/18 for the real nostalgia,” a second user said.

A third wrote, “I know nothing of Cactusfleamarket, I would rather have the CARS toy.”

The Daily Dot reached out to the TikTok creator via comment and to McDonald’s via email.