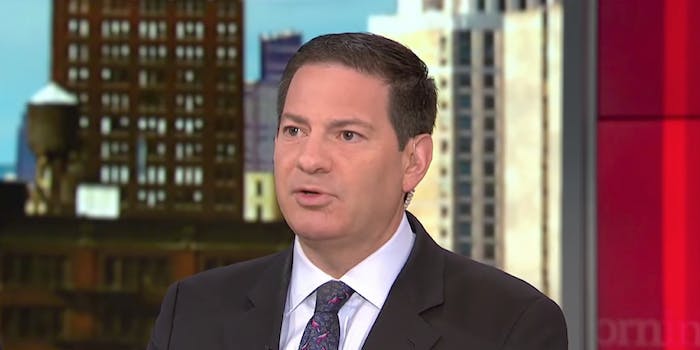 'I now understand from these accounts that my behavior was inappropriate and caused others pain.'

Journalist Mark Halperin, a political analyst who rose through positions at ABC News and Time before becoming an NBC News and MSNBC contributor, has recused himself from his work amid allegations from five women who say he sexually harassed them while at ABC News.

According to a CNN investigation, the women’s allegations range from being propositioned by Halperin for sex, to nonconsensual kissing and breast grabbing. Three of the women told CNN that Halperin had pressed his erection against them while meeting privately with him.

All instances occurred from the 1990s to the mid-2000s, and CNN did not learn of any other incidents after Halperin left ABC News. Four of the women, some who were juniors of his at the network, did not report his behavior. One, however, did allegedly tell a mentor. None of the women said Halperin ever promised things in exchange for sex, nor threatened retribution for rejection.

“Mark left ABC News over a decade ago, and no complaints were filed during his tenure,” ABC News said in a statement.

The report follows the weeks-long reporting of Hollywood producer Harvey Weinstein as an alleged serial sexual harasser and predator, a phenomenon that has emboldened women across the industry and internet to share their stories of harassment and assault. Similar allegations have also percolated and come forth against others including Ben Affleck, James Toback, and men in leadership across tech and journalism.

Halperin acknowledged and apologized for his inappropriate behavior in a statement to CNN on Wednesday, but denied grabbing a woman’s breasts and pressing his genitals against three of the women.

“During this period, I did pursue relationships with women that I worked with, including some junior to me,” Halperin said. “I now understand from these accounts that my behavior was inappropriate and caused others pain. For that, I am deeply sorry and I apologize. Under the circumstances, I’m going to take a step back from my day-to-day work while I properly deal with this situation.”