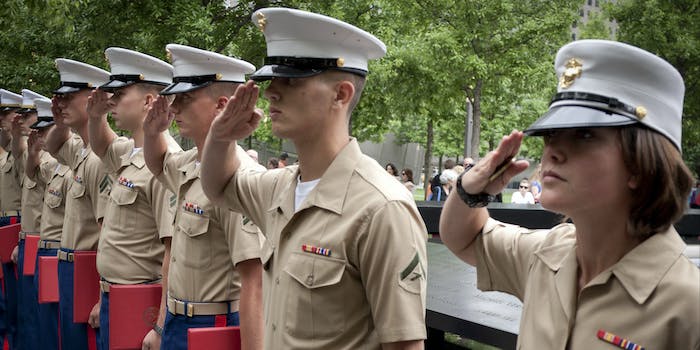 'When you integrate women, those numbers are going to spike up... and that’s just more things for the Marine Corps to worry about.'

On Thursday, Marshall Chiles, a former U.S. Marine and current spokesman for Marines United, the 30,000-member strong Facebook group at the center of a nude photo-sharing investigation, told the Daily Beast that the scandal was indicative of why women shouldn’t be integrated into the military.

“I think the exploitation of sharing nudity of other service members online will eventually get solved, but what I’m saying is that even before then, you still have special cases going on inside units,” Chiles told the Daily Beast. “So when you integrate women, those numbers are going to spike up within those infantry units and that’s just more things for the Marine Corps to worry about. And it’s not just the corps, but the Army as well.”

Chiles, a former sergeant who served on active duty for six years, expanded upon his idea that integration of female Marines is somehow to blame for the actions of male Marines. He referred to seven sexual assaults that occurred within a mixed battalion the Marine Corps created in 2014 to research the integration of women into combat roles. The unit had an estimated 300 men and 100 women.

Chiles also said that the men sharing nude photos of female Marines without their consent did it for social validation, and didn’t actually do anything wrong. He also doubted the Marines Corps’s ability to logistically keep up with sexual crimes within the Marines.

“You had 30,000 members in an online group, you’re always going to have your 1 or 10 percent that are going to do things wrong, that go against the Marine Corps and its standards. If you have a bunch of males together and this happens, just think about what can happen if you add women to that,” Chiles said. “Murder is illegal on the streets of America, but people still do it. So sexual crimes are still going to happen in the military regardless of how they [Pentagon and Congress] try to clamp down on it or revise [policies].”

The Marines United page was initially created to develop a community among active-duty and veteran marines who struggled with thoughts of suicide or had difficulties getting compensation through the Department of Veterans Affairs, Chiles said.

“The group should not have been shut down, as suicides will now shoot through the roof,” Chiles said of Facebook fulfilling the request made by the Marine Corps in January.