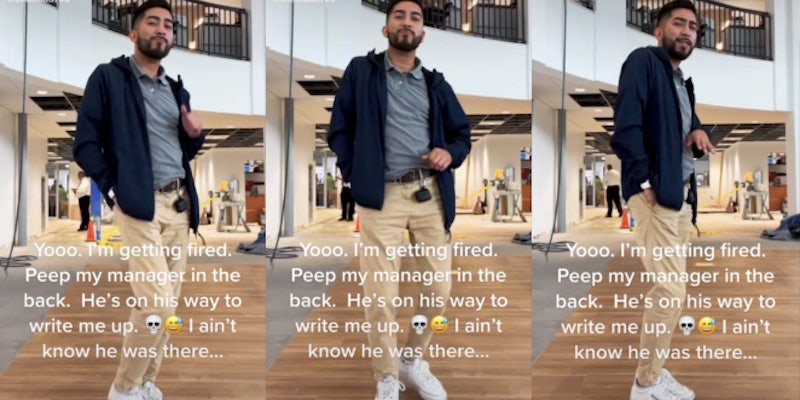 ‘I’m getting fired’: Worker accidentally films manager in the background while filming dance TikTok in his office

An awkward moment at the office was immortalized on TikTok after a worker noticed his boss in the background while he filmed himself dancing to Jordin Sparks’ “One Step At A Time.”

In the 5-second clip, the employee can be seen dancing, oblivious to the fact his boss is in the background. “I’m getting fired. Peep my manager in the back,” the on-screen text reads. “He’s on his way to write me up. I ain’t know he was there…”

In the comments, the 143,000 viewers were hugely amused at the situation. “Worth the write up, can’t put a cap on vibes,” one commenter said, to which the TikToker responded, “Never letting anyone ruin the vibe.”

A second commenter joked, “Ok, but getting fired vibing to Jordin Sparks is the way to go out.” The good news is, even if he got written up, it looks like the TikToker’s job is safe. In response to a third commenter, who said “we want to know what happened,” the user replied saying “I’m still employed.”

So, it looks like even bosses can’t resist a bit of Jordin Sparks.

The user did not immediately respond to the Daily Dot’s request for comment via the TikTok comment section.