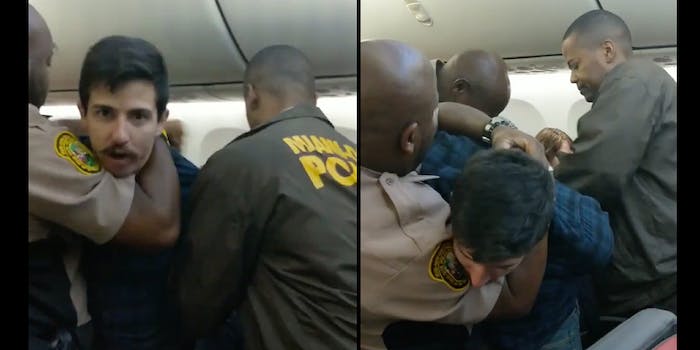 The man had refused to deplane.

A man was tasered and arrested aboard an American Airlines flight departing Miami on Sunday night after allegedly touching another passenger inappropriately, according to Miami-Dade police.

Jacob A. Garcia allegedly began touching the woman on board before takeoff, which prompted her boyfriend to call the police, according to NBC News. Because the plane bound for Chicago hadn’t yet departed the gate, crew members and police officers asked Garcia to evacuate the plane.

“American began the process of deplaning the entire aircraft,” American Airlines said in a statement. “During that process, a physical altercation between the same two passengers took place. Once law enforcement was on the aircraft, the passenger then became combative with the officers from the Miami-Dade Police Department.”

In a video captured by another passenger, Garcia can be seen resisting arrest. When he asked why he was being deplaned, one passenger responded, “Well, you just assaulted a lady, for one.” As he resisted, footage reportedly shows him reach for an officer’s gun.

After Garcia continued to fight with the three officers, he was tasered. At first, the taser did not affect Garcia and he attempted to take the taser away, but it eventually worked and the officers were able to take Garcia into custody.

A little excitement caused delay.. Miami PD had to TASE & forcibly remove this asshole from my flight home 😳 pic.twitter.com/GhihpmcCiJ

“We will cooperate with the Miami-Dade Police Department on this matter,” American Airlines said. “The flight, which was scheduled to depart at 9:30 p.m. ET, departed at 10:34 p.m. ET with all remaining passengers. We thank our crews and airport customer service team for their excellent work in this situation.”

Garcia was brought to Turner Guilford Knight Correctional Center where he was charged with battery, depriving an officer of a firearm, criminal mischief, and disorderly conduct, officials said.