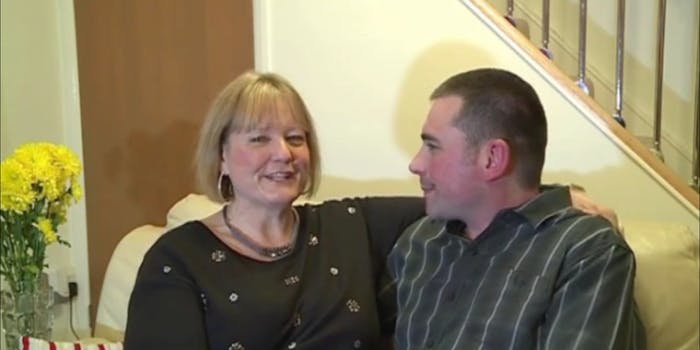 Man lists girlfriend on eBay as a joke, then gets a lot of real bids

Ladies, get ready for a real heartwarmer of a Valentine.

Ladies, get ready for a real heartwarmer of a Valentine. Not only did a U.K. boyfriend attempt to sell his girlfriend on eBay as a joke, but out of the flurry of bids from people who took him seriously, the highest bid was only £721 ($1,180).

Northamptonshire resident Shaun Coles removed the ad because he realized it violated eBay’s rules about not selling people. It’s also possible that he started to second-guess the fun of listing his longtime love as a non-returnable item.

Coles reportedly described his girlfriend of six years, Debbie Moran, as an “old woman,” complained about her inability to do housework, and used an unflattering photo as part of the joke. It shows her sprawled on the couch in leggings checking the computer next to what seems to be a pile of trash.

“In all seriousness, I wouldn’t sell her for anything,” Coles insisted on ITV.

“Awww. He’s trying to redeem himself,” Moran deadpanned. She went on to say that although she “hated” the photo and was “a bit annoyed” at first, she realized that Coles “didn’t do it maliciously.”

“Out of hand” to the tune of more than 50 real bids for Moran. The unidentified bidders may have just been bidding in the spirit of the ad, but it’s hard to imagine someone putting up $1,000 for a lark. Coles also said that while he’d made her an item that was free to collect in person only, he suspected there had been international interest as well. And 62 people gave Coles a “positive” rating of 100 percent.

If selling your girlfriend on eBay, even as a joke, is how you celebrate a six-year relationship, we don’t want to even think about what the seven-year-itch will involve.