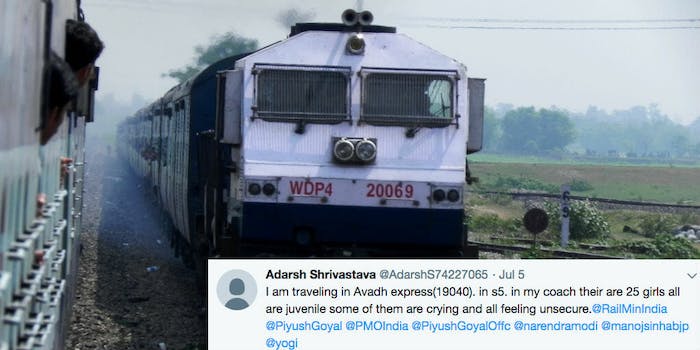 Increased awareness has led to a wave of anti-trafficking activism.

More than two dozen Indian girls are safe from human traffickers after a man alerted authorities with a single tweet.

An Indian man named Adarsh Shrivastava found himself traveling through the Northern Indian State of Uttar Pradesh last Thursday when he noticed a very peculiar sight on his train: 26 girls, all between the ages of 10 and 14, appearing restless and nervous in his cabin.

I am traveling in Avadh express(19040). in s5. in my coach their are 25 girls all are juvenile some of them are crying and all feeling unsecure.@RailMinIndia @PiyushGoyal @PMOIndia @PiyushGoyalOffc @narendramodi @manojsinhabjp @yogi

Shrivastava tweeted at the Indian railway authority that he suspected something was amiss. Less than a half-hour later, the Ministry of Railways had alerted local rail authorities to the situation. After a few additional stops, plainclothes officers reportedly boarded the train and arrested two men and took the young girls into custody, according to a report from the Press Trust of India, citing railway officials.

Kindly look into this matter @rpfner

The girls struggled to provide authorities with details on who their parents or guardians were. They were later transferred to state child welfare authorities, who are working with the girls to reconnect them with the rightful guardians. The Indian government’s Indian Railway Protection Force determined that all the girls were from West Champaran in Bihar, which is located in northeast India.

Shrivastava has provided a stock response to nearly every piece of praise on social media, stating “thanks, but as a sitizen [sic] of India it’s our responsibility to help people.”

India has historically struggled with human trafficking, particularly that of young children. Almost 20,000 women and children were trafficked in 2016 in the country, according to a report by Reuters citing government data. That statistic showed a 25 percent increase from the previous year, although police officials attributed the rise to increased awareness and reporting. In late 2017, an estimated 1.2 million people participated in a month-long march across India to protest human trafficking.

India’s cabinet passed a bill in February that could result in human traffickers receiving life sentences for their crimes. The bill will become law once passed by both houses of their parliament.