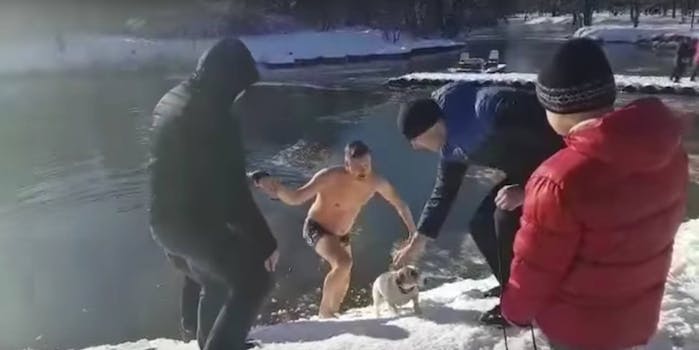 It might be time to rethink the doggie paddle for something a little more weather-proof.

A man in the city of Simferopol in Crimea was caught on video saving someone’s precious pooch from becoming a pupsicle. The dog itself couldn’t manage to escape from a body of water located in Gagarin Park, which was half-frozen and surrounded by ice.

In the video, the man strips down to his skivvies—a tasteful pair of boxers—tests out the icy waters, then drops in and swims to the doggie in distress. According to a Moldova news site, the man wasn’t even the dog’s owner—just a kind passerby who happened to be in the park.

The site also mentioned that at the time of the dog’s rescue, the temperature had dropped to a mere negative 6 degrees Celsius, so around 20 degrees Fahrenheit. At least he had his burning love for small mammals to keep him warm.