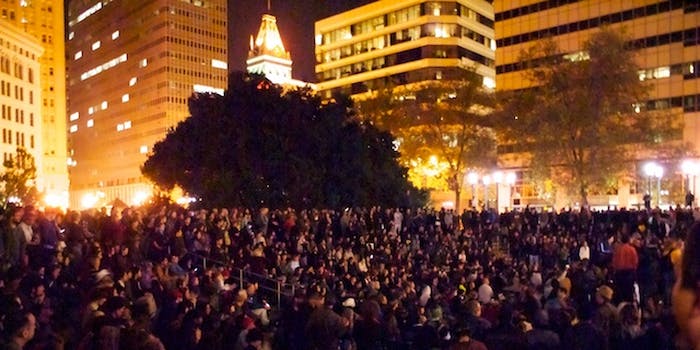 Does this study prove Malcolm Gladwell was right about social media and revolutions?

Occupy Wall Street protesters were already highly motivated before they organized on Twitter. So did Twitter really power the movmenet?

Three years after its publication, one of the most controversial articles ever written about social media just found some unexpected support. A team of researchers has discovered that Twitter did not create new activists during the Occupy Wall Street movement.

In other words, Malcolm Gladwell was right.

The Occupy movement, which arose from seemingly nowhere to protest the rapacious capitalism of American financial markets, was hailed as a Twitter-powered social movement, uniting strangers around the world under a common cause.

Did social media really create the movement, however? Researchers from Indiana University randomly sampled 25,000 Occupy tweeters and analyzed their relationships to one another before and after the movement started. Those on Twitter who were actively participating, they concluded, tended to be “highly interconnected users with pre-existing interests in domestic politics and foreign social movements.”

Twitter didn’t create new activists, in other words—just organized them. And who’s to say they wouldn’t have organized just as effectively without it? Social activism has existed for thousands of years without the help of 140 character status updates.

Indeed, the notion that all these people were connected and interested in politics before the movement began bolsters the argument of a much-debated 2010 article by The New Yorker’s Malcolm Gladwell about the limits of social media’s ability to grow a revolution.

The piece, called “Small Change,” threw a wet blanket on the idea that Twitter powered the student protests in Tehran in 2009. Gladwell argued that social media forms “weak ties” between people, which are simply not strong enough to motivate them to take the risks. And it’s taking risks that makes revolutions like the Arab Spring or Civil Rights era successful. Those movements instead rely on strong bonds, the type formed between friends or family or colleagues.

That argument drew criticism from journalists and academics alike. For example, Alexis Madrigal at the Atlantic said Gladwell’s argument that social media hampered the growth of movements was unsupported.

While it doesn’t negate that criticism entirely, the new study does address one central tenet of Gladwell’s argument. According to the study, there was no evidence that the structure of the Occupy network–the behavior and relationships of its participants–was transformed over the course of the movement.

Meaning Twitter did not, on a large scale, produce new activists.

That said, it’s difficult to measure, from Twitter alone, how much of an influence a core group of tweeting activists has on its followers. After all, one doesn’t have to tweet anything to be influenced by an idea on Twitter. Perhaps the social network did create new activists who simply chose not to talk about it on Twitter. That’s one area the study fails to address–and one that’s likely to be a blind spot in all studies of the platform’s reach.

Since “Small Change” there have been a number of protest movements–Occupy included–that will no doubt provide researchers with a wealth of new data to examine Twitter’s power to motivate protests like those of the Civil Rights era.

Regardless, it isn’t a given that protesters must create new activists to be successful. As science writer David Dobbs wrote, “The antiwar movement stopped a war with a far sloppier and less disciplined movement than that created by the southern churches.”