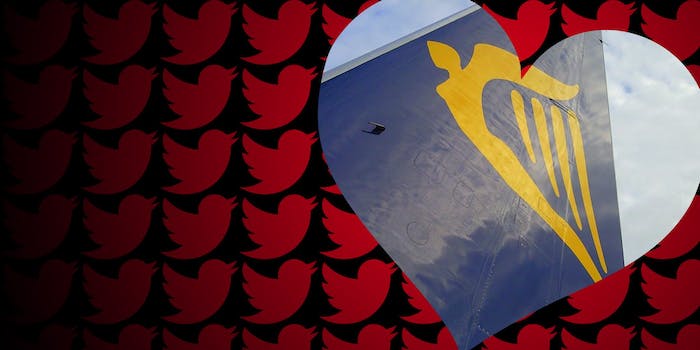 It’s a love story for the ages: Boy meets girl, boy falls in love, boy and girl are separated at airport security, boy launches a sophisticated viral social media campaign to track girl down, boy and girl are reunited once more!

On a Ryanair flight from Dublin to Barcelona, 24-year-old Irishman Jamie Kelly found himself sitting beside 27-year-old “Katie” from Nova Scotia, Canada. After Kelly offered up his seat to Katie’s mother—with whom she was traveling—the pair began chatting merrily, but became separated at passport control in Dublin. Despite searching, Kelly realised he’d lost her, and returned home alone.

Unperturbed by the fact he didn’t know her surname, her phone number, or almost anything about her, the enamoured Irishman didn’t give up there. Instead, he made it his mission to track her down, and—with the help of his friends—launched a Twitter campaign to find her.

Is your name Katie? Are you from Nova Scotia? Are you travelling around Ireland? Did you recently meet a young lad called Jamie? #findkatie

#findkatie canadien girl, brown hair travelling around Ireland with her mum! @theoriginalgoup is looking for her. #loveatfirstflight

Using the hashtags #loveatfirstflight and #findkatie, Kelly began his search, telling CBC News at the time: “We started chatting and hit it off. I think we made a connection anyways.” The resident of Galway, Ireland even took to the airways in his search, appearing on Irish radio.

Kelly’s efforts paid off, however; Katie Moreau—as the object of the Irishman’s affections is known—recounted to CBC News her amazement when he did manage to make contact. “I never thought I would ever see him again so what a surprise after a couple of pints to log onto Facebook and see all these messages,” she said. “I find it very humorous because all my friends back home are losing their heads about it.”

Moreau was “obviously very surprised and flattered,” she said, and revealed that Kelly’s feelings were not unrequited.  She tried searching herself for “the handsome Irishman” with “lovely eyes” at Dublin Airport herself, but eventually gave up after fearing appearing too desperate. ” I suppose, in hindsight, looking a bit longer wouldn’t seem as desperate in comparison.”

Moreau recounted her experience on the plane with Kelly fondly: “When I was on the plane I talked to him incessantly because I had been traveling for two months in Italy and Spain and it was just so nice to be around English speaking people, plus I’m a talker.” She adds, “We had lots in common plus he was very easy on the eyes.”

Now reunited, the pair are undaunted by the 10-hour flight time between their homes. The Metro reports that the pair have since been chatting online, “and plan to meet each other again very soon.”